Why You Can’t Trust News Media 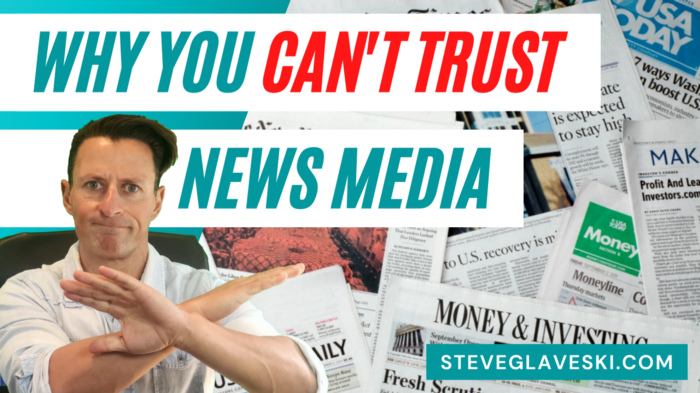 Once upon a time, news outlets were as scarce as big-box retailers. The barriers to entry to create and distribute media at scale were prohibitively high, and so most nations had a handful of national newspapers, radio programs, and television stations — typically backed by wealthy aristocrats and businessmen.

The financial barriers (and regulatory barriers such as a license to operate) made oligopolies of yesteryear’s news outlets. With money rolling in and few competitors, outlets could afford to pay journalists top dollar to spend days, weeks, and sometimes months performing investigative journalism, and publishing nuanced perspectives on complex issues.

But these barriers to entry have since come crashing down.

Everybody is a Media Company

As serial entrepreneur and media empire in his own right Gary Vaynerchuk put it, “whether you like it or not, every person is now a media company. The tools are easy, free, and everywhere… if you’re not producing content, you basically don’t exist.”

In the past twenty years, super-fast, super-cheap internet and smartphones have become pervasive, both of which coalesced to make it possible for anybody to create and distribute content to millions of people online.

As futurist Alvin Toffler put it in 1970, the future will belong to ‘prosumers’, people who produce and consume. That future is already here.

We have teenage TikTokers generating hundreds of millions of followers and views.

We have independent three-man operation podcasts like the Joe Rogan Experience generating a 190 million downloads a month and a $100 million three-year licensing deal with Spotify.

And everybody, except for the monk meditating on the mountaintop, is posting and sharing content via social media every day.

It seems like almost everybody has a podcast (I’ve got three at the moment).

And this is to say nothing of streaming media services such as Netflix.

People are also becoming increasingly wired to check their phones for yet another social media engagement and dopamine hit.

The typical American checks their phone 262 times per day and switches screens while supposedly working at their desks every 20 seconds, the ability to sit still and take in a thoughtful and nuanced perspective, for the most part, is being lost.

People are drawn to black and white perspectives that they can evaluate and make sense of in seconds, determine whether it fits their pre-existing worldview, and share it — sometimes not because they thought it was a decent read, but because it fits their identity and it gives them an opportunity to gain some social currency.

In fact, 70 percent of Facebook users comment on science articles based on the headline alone. On Twitter, 59 percent of people share an article without having read it. This prompted Twitter to roll out an update in 2020 to remind users that they are sharing an article they haven’t tapped on before posting.

For better or worse (I would argue worse), we want instant gratification and we want it now!

Fight to the Bottom

So what does this noisy and saturated media landscape, plagued by short attention spans and 15-second videos, one where we are creating more data in one day than all of human history up until the turn of the millennium, do for the news media?

It leaves them fighting for scraps.

And when it comes to ad-driven media, those scraps can be quantified.

Google’s ad network AdSense pays about US$4 per 1,000 article views (or ad impressions).

Therefore, an article that generates 1 million views might generate somewhere in the vicinity of, say, US$4,000.

Now, if the average salary for a journalist in the United States is US$53,000, that’s an effective weekly salary of US$1,000. The said journalist would need to generate 250,000 views per week just to cover their salary.

But most articles don’t generate anywhere near that much. Most flop.

This is the nature of any creative pursuit, and of the Pareto Principle which stipulates that four percent of causes will generate 64 percent of effects (which means that one in twenty-five articles will generate about two-thirds of the views and the lion’s share of revenue).

Here in Australia for example, the Herald-Sun generates 860,888 views per month.

That equals an average of just 430 views per article, per month.

The New York Times generates about 74 million monthly desktop visitors, which, with its 6,500 odd articles and blog posts per month, still works out to an average of just 1,120 views per article (not including mobile and print). Some of the Times’articles will generate millions and millions of views, whilst the lion’s share will be also-rans.

I also contend with this, something I wrote about here.

Of the 250 odd articles I’ve published on Medium:

This rule of nature plays out everywhere, even when it comes to top-selling Nintendo games.

So, how is newsmedia responding to all of this?

The average journalist is often publishing many articles a day, with quality and substance falling victim.

In fact, at media outlets that take this clickbaity business model to the extreme, such as BuzzFeed, ‘journalists’ write several articles a day. As Sara Coello told the Columbia Journalism Review, her record for the Dallas Morning News was seven articles in a single day.

If you’re pumping out seven articles in a single day it’s almost a certainty that it’s not going to be anything even remotely resembling thoughtful journalism, but just mere entertainment designed to generate clicks and shares.

And instead of providing nuanced perspectives that appeal to the intellect, they’re providing clickbait that appeals to fear and anger.

Writing sensationalized articles designed to appeal to emotions such as fear and anger is what gets engagement, it’s what gets people sharing.

It’s why events such as the murder of George Floyd, and the US withdrawal from Afghanistan, are both examples of Christmas come early for the media because these events provided them ample fodder with which to engage millions of people.

Trump was perhaps the biggest gift of them all, leading the news media to scratch their heads and wonder ‘what now?’ once he left the White House.

Lucky for them, a global pandemic rolled into town.

The COVID-19 pandemic, something that appeals to both fear and anger for myriad reasons, has adorned the front page of most mainstream media outlets around the world for the past 18 months.

In Australia, hyper-sensitivity and a fanatical obsession with top-line case numbers (at the expense of numbers that really matter, such as hospitalizations and deaths) has fueled media rooms across the country.

A cursory look at the Twitter feed of FOX or NBC will reveal articles that predominantly appeal to these emotions, and effectively get people to turn on each other and hurl abuse in the comments. Researchers in fact found that US mainstream media skews 91% negative, capitalizing on every human’s innate negativity bias — our tendency to notice and dwell on negative stimuli much more than positive stimuli

I often share articles that I’ve labored over for hours and sometimes days on complex issues via Twitter, but the lion’s share don’t get much, if any, engagement. But if I post a contentious tweet about something divisive appealing to emotions such as fear and anger, to the moon we go.🚀

With more than half of Americans get their news ‘sometimes’ or ‘often’ from social media, according to Pew Research, why would any media outlet dependent on eyeballs and ad revenue actually take the time to investigate and write thoughtful pieces?

It comes down to cents and dollars, and there is no sense in doing so.

And there are other major reasons not to trust the news media — such as political bias, and conflicts of interest brought about by funding sources, be they Government or industry. But these are beyond the scope of this article.

How to Consume the News

So where to from here?

Do we give up on journalism? Not exactly.

There are a few things we can do, as follows:

Platforms such as SubStack have given a home to genuine and independent journalists such as Matt Taibbi and Bari Weiss, among many others, who provide balanced and nuanced takes on political matters.

Media outlets that move away from the ad model towards a solid subscription model, tend to have a business model that is more aligned with quality journalism than one that’s based on eyeballs alone. However, with any subscription model, we need to watch that outlets don’t fall victim to pandering to their subscribers and putting out biased takes that will ensure renewal — this is true of both large and small subscription-driven networks)

When you consume news from multiple sources, preferably from across the political spectrum, you develop better judgment to ascertain what’s probably true, or at least, more true. As Nobel prize winner Daniel Kahneman observed in his latest book Noise: A Flaw in Human Judgment, you can improve decisions by aggregating multiple independent judgments.

4. Watch Out for Bias

If you’re uncertain whether what you’re reading or consuming is biased in any way, you can use Rand’s Media Bias tool to help gauge bias. When an outlet is extremely biased, it is going to be incentivized to ‘massage’ the truth in order to appeal to its audience and ideology.

Finally, and perhaps a little optimistically, we can look to the values of either the publication or the journalist behind the story. This is something we might gauge over time, but given how irrational human beings really are, and our propensity to fall victim to all manner of psychological vulnerabilities and biases, perhaps not something we can judge all that well.

With that, having spent the last several hours writing this, it’s time for me to check WhatsApp. Dopamine hits are waiting.

Why You Can’t Trust News Media