The Optimism Bias — Don’t Let it Kill You 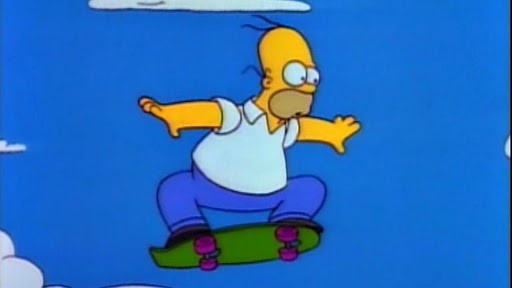 Optimism — a mental attitude reflecting a belief or hope that outcomes will be positive.

If it weren’t for optimism, many of our greatest achievements would not have come to fruition.

As Nietzsche said, us humans like to fool ourselves in order to orient towards the future.

If we weren’t optimistic, or at least hopeful that our actions would result in positive outcomes, then we’d find it might difficult to get out of bed in the morning.

But like most things, taken too far or unjustified, unchecked optimism can prove to be your undoing.

The Dark Side of Optimism

Simpsons fans will recall Homer’s attempt at jumping Springfield Gorge with a skateboard.

Here’s how it went down…

Bart wants to jump across the gorge on his skateboard, Captain Lance Murdock-style. Homer instead attempts to make the jump in an attempt to show his son the dangers of doing daredevil stuntwork, but Bart chooses to not do daredevil stunts ever again in an attempt to prevent Homer from doing it. However, Homer, due to the skateboard unexpectedly going on with Homer on it, almost makes the jump, falling to the bottom banging his head as he goes along. The ambulance later crashes into a tree, sending Homer out of the back on a stretcher and tumbling down again. — Simpsons Fandom

At one point during this jump, Homer was incredibly optimistic that he’d make it — jubilantly exclaiming that it was the greatest thrill of his life — only for this to happen seconds later…

Like Homer, you might have your own adverse experiences with the optimism bias — both great and small.

Perhaps you’re an entrepreneur who invested tens of thousands into developing a product based on the Kevin Coster-inspired premise of ‘build it and they will come’, only to declare bankruptcy shortly thereafter.

Perhaps you invested your life savings into a selection of stocks or crypto assets that you were confident would continue to appreciate in value, only for their value to nosedive shortly thereafter and never recover.

Perhaps you’re an author who wrote a book about the topical ideas of the day. You successfully secured a big name publisher, scheduled lots of podcast and conference appearances and were sure your book was going to sell well…but Nielsen ratings begged to differ.

Or maybe you thought that this whole COVID-19 thing would just ‘blow over’, instead of escalating to shut down the global economy. I know I did, putting the hysteria down to media hype alone as recently as two weeks ago!

Psychologists refer to our tendency to be over-optimistic, overestimating favourable and pleasing outcomes as the optimism bias.

So knowing all of this, what can we do to best avoid falling victim to said bias?

The best way to navigate uncertainty is to experiment, learn, and adapt.

To do this, we first need to define the assumptions that underpin our optimism.

It’s easy to overdo it… don’t.

For example, if I am the above-mentioned author, then some of my assumptions might be that:

In order to learn as much as we can quickly, we’ll want to focus on the most impactful and risky assumptions.

To do that, we’ll need to prioritise these assumptions — the table below might help you.

Second, take this result and divide it by whether or not the assumption is something that matters today, and that you can test today, to determine the final number. The higher the number, the higher the priority.

This forces you to not only focus on the most impactful assumptions, but also on those that actually matter today.

In this case, we can test the former today, but the latter is something we won’t be able to test until people have had an interaction with our service. So unless the first assumption is true, the second one doesn’t matter.

In this example, everything can be tested today so Step 2 (time) is not applicable.

Assuming a simple Google Trends search or BuzzSumo content search suggests that everybody is talking about the underlying topic of my book, then my certainty around assumption #4 is quite high.

However, assumptions #2 and #3 are impactful but my certainty is low. I might rest my hat on my podcast schedule and pending Forbes appearance, or I could learn whether this will actually move the needle on sales.

As such, these are key assumptions that I need to test first.

I can test my assumptions by running some simple experiments or building some simple prototypes (such as Facebook ads or appearing on one podcast, instead of committing to one hundred appearances).

Potential experiments to test assumption #2 and #3:

These are just some of the types of experiments you could run, but the faster you do this the faster you get actual data to either support or challenge your optimism bias, and empower you to make better decisions such as divert your attention towards higher performing channels or actions.

With numerous experiments at my disposal, I’d want to use the experiment or prototype that delivers the greatest amount of learning with the least effort. If you need help prioritising your test cases, you can use the table below and prioritise by the higher ‘learning on investment’.

Just watch out for another cognitive bias — the backfire effect — a human tendency to react to disconfirming evidence by strengthening one’s previous beliefs. More on that here.