The Joy of Not Giving a F*ck 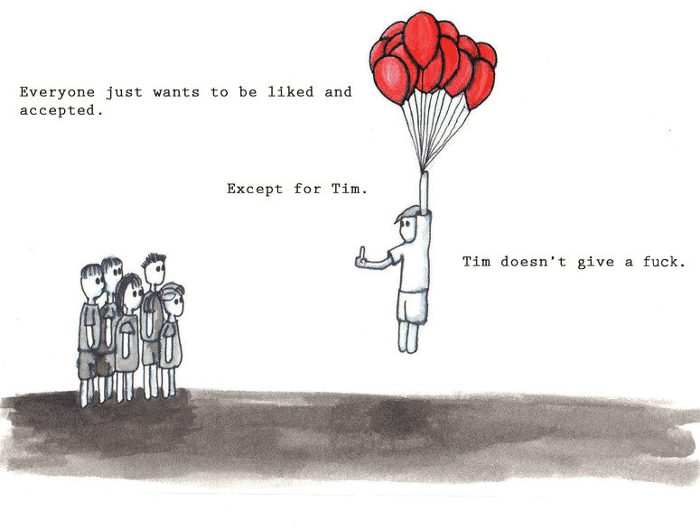 In his bestselling book, The Subtle Art of Not Giving a F*ck, Mark Manson isn’t imploring us to stop caring altogether but to stop caring about things that aren’t worth it, and are outside your control.

Growing up and throughout much of my twenties, I was the type of person who would operate from a place of ego.

I wouldn’t pursue difficult tasks if I thought it would make me think lesser of myself. I wouldn’t say “I don’t know” in a conversation for fear of looking stupid. I would take attacks on my position as personal attacks and respond accordingly. I wouldn’t let someone have the last word.

All in all, I was a far less emotionally intelligent version of the person I am today at 36 (but don’t get me wrong, I still have work to do).

Having spent the last eight or so years exploring philosophy, and practicing various teachings not only in my personal life, but whilst building my first modestly-successful seven-figure business, Collective Campus, I’ve had ample time to work on my emotional intelligence, to be intentionally responsive instead of involuntarily reactive, and to ultimately, not care about things that aren’t worth it.

Lately, I’ve been laying the foundations for what I hope will be my next big venture, NOFilter Media — a podcast and media network. I’ve been sourcing talent from across myriad domains to host podcasts, be they about technology and science, business, sports, entertainment, culture, politics, or health and fitness.

One such person that I reached out to — who I’ll refrain from naming because I am not an a$$hole — is a well-known professional skateboarder.

I delivered my pitch and he was keen to talk further.

We got on the phone and had what was, by most measures, a constructive conversation.

I sent the contract over, and he accepted in principle and laid out a number of (mostly unreasonable) requests that I decided to nonetheless entertain (below — my response is in bold).

The response I received blew me away.

First, it made no logical sense — he asked for way more than just a vintage microphone (which, by the way, is totally unnecessary for recording a podcast).

And second, his words failed to meet anything resembling a civil and mature exchange by about 32 orders of magnitude. Worse still, this guy is not some pimply-faced teenage skater still figuring this life thing out, but this dude is in his 40s!

My immediate reaction was a moment of stunned silence, before hitting reply and typing the first few words of my response.

And then I caught myself, and stopped.

Instead of engaging in a game of email jousting, one that would no doubt occupy my headspace for the entire day, if not days to come, I chose instead to not respond at all and move on to more fulfilling activities.

As I’ve written previously, the true measure of a man or woman isn’t what they have achieved across one domain only. It is about multi-dimensional success, and ultimately, about carrying on like a fundamentally good person.

For all this person had achieved on their skate deck, they clearly hadn’t developed much as a person off it.

Had I done anything to warrant this response?

Was their response worthy of a reply?

Would they be easy to work with?

Would responding in a game of one-upmanship improve my life?

The answer in all cases was a clear no.

This was a clear case of my deciding not to give a f*ck about things that don’t matter.

It was a case of not enabling such behaviour.

And reflecting on their email, it was a case of dodging a painful bullet.

As a result, I moved on and saved my mental energy for more important pursuits, like finding a professional skateboarder to work with who didn’t make unreasonable requests, constructed eloquent sentences, and is a genuinely nice bloke. I also shifted some of that latent energy into doing something constructive — like writing this post, so a few more people might be inspired to not give a f*ck a little bit more.

As Roman philosopher-king Marcus Aurelius put it, “you have power over your mind, not external events — realise this and you will find strength”.

You always have the power to choose how you respond. Use that power wisely.