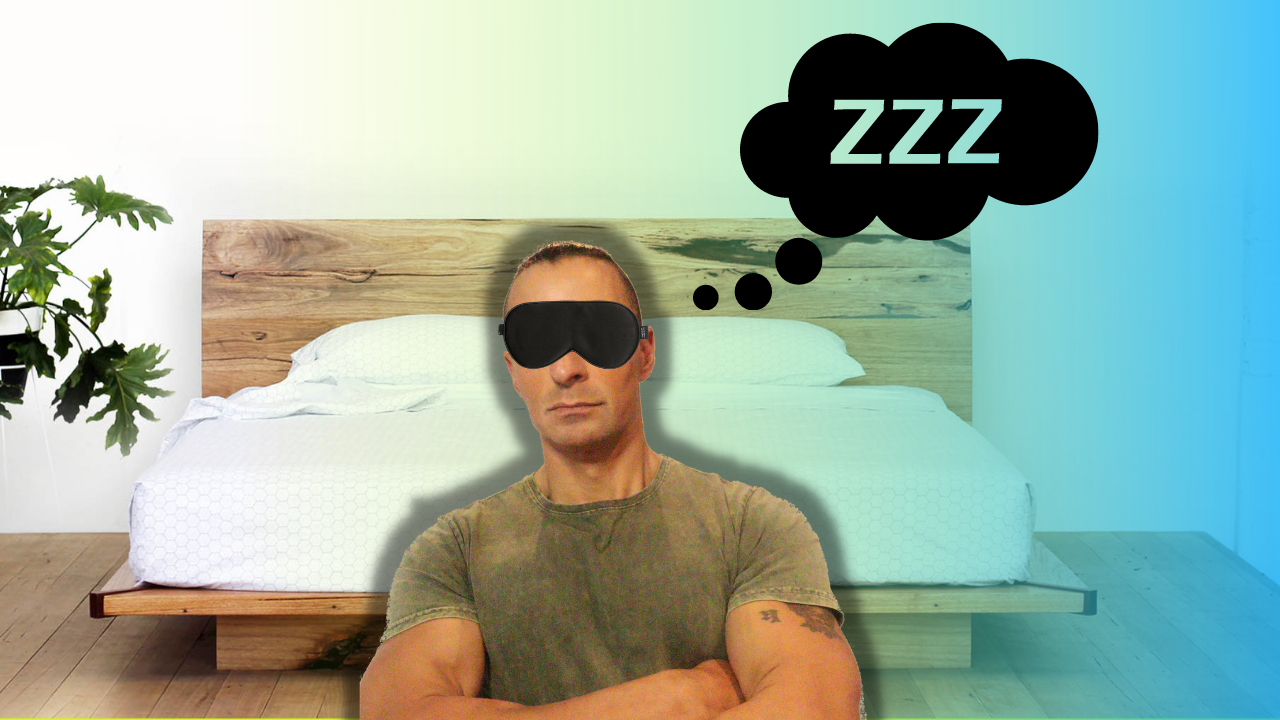 Forget activated turmeric. Sleep is mother nature’s ultimate biohack, and it’s freely available to all of us.

Sleep is the foundation upon which all of mental and physical performance rests. But the majority of us aren’t getting enough of it, and our focus, creativity, and personal relationships suffer as a result.

The wellness industry is worth US$4.2 trillion. It can be overwhelming deciding what to eat (or not eat), what kind of exercise to do, and which meditation app you should be using.

But if you only have the time or inclination to get just one thing right, optimizing your sleep will give you a disproportionately more significant bang for your buck than anything else.

According to Matt Walker, professor of neuroscience and psychology at the University of California and author of the bestseller, Why We Sleep: The New Science of Sleep and Dreams, there are myriad reasons why we need to be getting adequate sleep, and several that stand out as being of utmost importance to our work.

Sleeping enriches a diversity of functions related to learning, memory, creativity, decision making, and emotional regulation. So basically, all the important stuff your brain does.

Yet two-thirds of adults throughout all developed nations fail to obtain the recommended eight hours of nightly sleep (which means that there is a 67% chance that you are one of them). Utterances like “I can perform well on six hours a night”, and “eight hours is a pipe-dream” are commonplace in our world of always-on, hustle culture.

And I get it, I said the same thing for almost ten years, willing myself out of bed at 5 am for an early-morning workout, after having slept somewhere between six and seven hours. It was, at the time, a part of my identity to be that chest-beating guy. The only thing I stopped short of was taking a photo of my wristwatch at 5AM each day and posting it to Instagram.

But the science suggests that routinely sleeping less than six or seven hours a night can demolish your immune system and can increase your risk of cancer.

And the thing about thinking six hours is enough is you don’t know you’re sleep deprived when you’re sleep-deprived.

We typically alternate between shallower NREM sleep and deeper REM sleep throughout a sleep cycle, with the majority of our REM sleep occurring in the latter end of an eight-hour sleep cycle.

First and foremost, acute total sleep deprivation impaired attention and working memory. In addition, it had a negative effect on long-term memory and decision-making.

Partial sleep deprivation too — something that is much more common in everyday life — was found to negatively influence attention and vigilance.

In the study, groups sleeping 3, 5, 6, and 9 hours were compared. Their speed and performance in a test deteriorated almost linearly with sleep restriction. Even the 7-hour group’s performance was impared compared to that of the 9-hour group. I should stress that this study is by no means definitive and additional studies are warranted.

The ‘recycle rate’ of a human being is about 16 hours. After 16 hours of being awake at the brain begins to fail and after a first night of no sleep at all, lapses in concentration increase by over 400%.

NREM supports the storage and strengthening of new facts and skills.

REM sleep connects those facts and skills with each other, helping us to develop a more accurate model of how the world works and become more innovative and creative. Innovation and creativity, after all, is a byproduct of associational thinking — connecting dots between disparate bodies of knowledge, and as Steve Jobs noted in his Stanford commencement speech, “you can’t connect the dots looking forward, you can only connect them looking backward”.

A large body of studies has looked at sleep and creativity over the past 100 years, with a 2005 literature review looking at 11 of these studies, finding a positive correlation between sleep and creativity. It was found that NREM sleep reflects frontal lobe activity — important for divergent thinking which is vital to creativity and also produced more remote associations.

REM sleep was found to enhance creative problem solving for items that were primed before sleep — useful for naps that delve into the REM state.

On this, Thomas Edison would famously nap at his desk with two steel balls in both hands when challenged by a daunting problem. On the floor, directly below his closed hands, he placed metal saucers. As he entered what’s known as ‘the transitional state between wakefulness and sleep’ Edison would drop the steel balls onto the saucer, effectively waking him up. He’d then furiously write down anything he was thinking about just before he was awoken by the loud crash.

If you’re not getting enough sleep, all those dots you’re collecting through books, podcasts, blogs, conversations, lectures and so on, may go to waste if you don’t get enough NREM sleep (memory) or REM sleep (associational thinking), making you less knowledgeable and creative.

Some of the greatest feats of transformative thinking in the history of the human race can be credited to deep REM sleep, such as the discovery of the periodic table of elements, which came to Dmitri Mendeleev in a dream.

“I go to bed as usual with my guitar and i wake up the next morning and i see that the tape is run to the very end. i think well i didn’t do anything. maybe i hit a button when i was asleep. so i put it back to the beginning and push play and there in some sort of ghostly version is the opening lines to satisfaction. it was a whole verse of it. and after that there’s 40 minutes of me snoring. but there’s the song and it’s embryo and i actually dreamt the damn thing.”

It is early night sleep rich in deep NREM sleep that provides superior memory retention savings relative to late-night REM-rich sleep. The more NREM sleep you have, the more you will remember the next day.

Even daytime naps as short as 20 minutes (hello Edison) can offer a memory consolidation advantage so long as they contain enough NREM sleep.

Walker says that following a night of sleep, you regain access to memories that you could not retrieve before sleep. “Like a computer hard drive with some files have been corrupted and inaccessible, sleep offers a recovery service at night.”

A lack of sleep has been found to make us more emotionally aroused and sensitive to stressful stimuli and events, and fundamental to our ability to cope with everyday life. Just as emotions can impair our sleep, a lack of sleep can impair our emotions. Sleep deprivation has been found to affect emotional processing. Our morning mood improves significantly when we have sufficient REM sleep, but worsens in the absence of it.

Sleep deprivation shows a 60% amplification in emotional reactivity. With a full night of plentiful sleep we have a balanced mix between what Walker calls our emotional gas pedal (our fight or flight inducing amygdala) and brake (our prefrontal cortex). Without sleep, the strong coupling between these two brain regions is lost.

Otherwise healthy people can experience a neurological pattern of brain activity similar to depression, anxiety, post-traumatic stress disorder, schizophrenia, and bipolar disorder if they have their sleep disrupted or blocked.

Not Getting Enough Sleep?

REM sleep predominantly occurs during the latter portion of an eight-hour slumber. If you only get six hours of sleep a night, then you miss out on 60–90% of your REM sleep which can have grave consequences insofar as your creativity and mood is concerned.

Not everyone needs eight hours, but it’s a small percentage of the population who can get away with continuously sleeping six hours or less, without suffering short and/or long-term implications.

According to one 2018 study, the body’s ability to function declines if not in the seven to eight-hour range.

So, how do you know if you’re in that tiny percentage of people, or whether you should be ramping up your sleep?

Did you answer yes? If so, you’re probably not getting enough sleep.

A quick word on caffeine. The mean half-life of caffeine in healthy individuals is about 5 hours, but can range between 1.5 to 9 hours depending on how your body metabolites it, so if you enjoy an espresso at 2pm, it might be the reason you're finding it hard to fall asleep at night.

How To Get a Better Night’s Rest

If you and your partner can’t agree on the room temperature, consider investing in a Chilipad blanket to set either side of the bed to the optimal temperature.

2. Don’t look at devices or blue light (smartphones, tablets, laptops) within an hour of bed and DIM THE LIGHTS

A bedside lamp is 20–80 lux and a living room is 200 lux, suppressing melatonin by 50 percent. Even 8–10 lux delays melatonin release, making it harder for you to fall asleep. If you must, wear blue-light suppressing glasses or ‘blue blockers’.

3. Journal: get thoughts out of your head and onto paper

The simple act of journaling has been shown to calm an anxious mind, but you don’t need a fancy journal that some IG influencer just released. Any old piece of paper will work — try writing down whatever is on your mind, and supplement that with three things you’re grateful for to put you in a positive frame of mind.

4. Have a hot bath, a hot shower or a sauna before you hit the hay

Doing so will make it easier to fall asleep as your body begins its cooling down process.

You might be able to fall asleep on a glass of red or a glass of whiskey, but the quality of that sleep will be more akin to a sedated sleep than a natural one, and you’re more likely to wake up in the middle of the night as the alcohol wears off).

Overeating — especially heavy and spicy foods — can interfere with digestion, and make it difficult to fall asleep.

7. Down a magnesium supplement before bed

Magnesium, dubbed by many the original chill pill, is an old home remedy for all that ails you. In 1968, a research paper by Wacker and Parisi found that magnesium deficiency could cause depression, behavioural disturbances, headaches, muscle cramps, seizures, ataxia, psychosis and irritability — all reversible with magnesium repletion. And it’s great for calming you down for a good night’s rest.

Sex makes it easier to get a good night’s rest. A powerful orgasm to a male is equal to a 2–3 mg shot of Valium. To put that into perspective, hospital patients are typically administered with 5 to 10 mg of valium.

If you need additional support, consider supplementing with Melatolin, a natural food supplement that helps with insomnia. It can help you calm down before bed and reduces the time required to fall asleep. Unlike other sleep medications, it doesn’t cause withdrawal symptoms or dependence.