Are You Wasting Your Talent? It’s Time to Stop and Reflect. 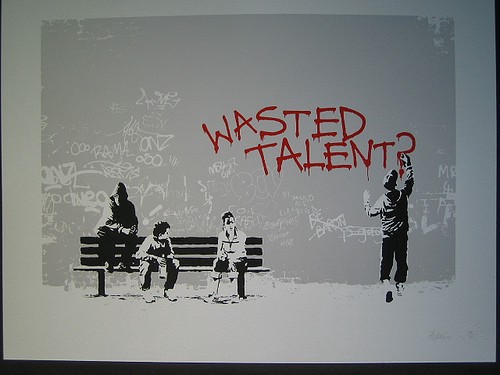 A convenient excuse if ever there was one. It’s an excuse that prevents people from exercising regularly, reading books or meditating — you know, things that are said to improve our lives.

Given we’re all finding ourselves with a little more time on our hands at the moment, thanks to COVID-19 social distancing measures, the excuse has become redundant.

And this is a golden opportunity.

If you run a business — it’s a great time to work on your business, instead of in it.

If you’re a road warrior with kids — it’s a great time to reconnect with and spend more time with your children.

And if you consider yourself ambitious and talented, then it’s a great time to reflect on wether you’re wasting your talent, and by extension, your life.

Far too many people squander their talents and wind up on their deathbeds wishing that they either didn’t work so hard, or had actually lived a life true to themselves — these are two of the five major regrets, according to palliative care nurse and author of Five Regrets of the Dying, Bronnie Ware.

We tend to be a lot more careful about how we spend our money than our time, but time, unlike money, cannot be earned back once we’ve spent it. As Roman philosopher Seneca put it, “it is not that we have a short time to live, but that we waste a lot of it”.

And there’s nothing like a devastating event — in this case a pandemic — to pre-empt a change in our outlook and behaviour.

So are you wasting your talent? Time to reflect.

Competition can blind us to what really matters.

It’s easy to fall into the trap of, say, spending the next three years building your Instagram following — just because everyone else is. But that’s not a reason to do so.

Your actions should bring you closer to your goals, and if slaving away to develop your following doesn’t increase your company’s revenue, or bring you inner peace — two admirable pursuits — then why are you doing it? For the likes? As Naval Ravikant likes to say, if you play stupid games, you win stupid prizes.

If you find yourself spending more than half of your waking hours doing something purely for the sake of acquiring followers, purely for the money or purely to keep up with the Joneses, is that really how you want to be spending your one and only life?

Working for a Consensus-Seeking Company

As psychologist Edwin Locke found, short-term feedback is key to motivation. Furthermore, a sense of autonomy and control is key to emotional wellbeing. In many organisations, you can find yourself with neither.

In many organisations, most decisions are treated as high risk and consequential — even though they’re not — with the most unimportant things necessitating several one-hour meetings, with several people, over several weeks, if not months. This is a hallmark of low-trust organisations where people would rather outsource accountability to others instead of take ownership or entrust others to get stuff done.

It renders you powerless and renders the time between action and response incredibly long, leaving you unmotivated and living for the weekend.

Risk Aversion and Discomfort with Ambiguity

It is basically a fact of life that risk and reward have a positive relationship.

If you’re the type of person who shies away from calculated risks, and instead prefers to always play it safe, then the rewards you can expect will be limited.

As Anais Nin said, “life shrinks or expands in proportion to one’s courage”.

Perfectionism, Ego and a Fear of Failure

I have two musician friends — let’s call them Jack and Jill.

Jack is a perfectionist, and he doesn’t want to play live until his music is just perfect (whatever that is). As a result, Jack has been honing his craft in stealth mode for a good 15 years and only ever played live once. The performance wasn’t perfect so Jack has shied away from live performances ever since.

Despite picking up her instrument at the same time as Jack, to this day Jill is an inferior musician. She doesn’t have the technical chops that Jack has.

However, as soon as she could strum a few chords, Jill started playing whatever gigs she could, starting with open mic nights at the local pub. Despite her lack of natural talent, Jill has gone on to play hundreds of gigs, joined bands with record deals and toured Europe, North and South America on several occasions.

Perfectionism has a tendency to anchor us in place, whereas getting started, moving quickly, learning and adapting, gets us much further, much faster.

Having a Fixed Mindset and Giving Up Easily

As Zig Ziglar famously said, “anything worth doing is worth doing poorly until you can do it well”.

Any worthwhile pursuit is going to be difficult, and is going to force you to roll that proverbial boulder up hill for an extended period of time. It is imperative that we have a positive relationship with adversity, and see obstacles and setbacks as necessary to our progress.

It is critical that we have what psychologist Carol Dweck calls a growth mindset, instead of a fixed one. A growth mindset is underpinned by a belief that we don’t have the ability to do something well yet… but with enough effort, we’ll get there!

Anchoring to the Past and Being Inflexible

Having a “way things have always been done around here” mindset and refusing to challenge the status quo ultimately means that you’ll be left behind.

The world is moving quickly, and if you anchor to the past, instead of adapt to the present — or come into the present kicking and screaming, then you and/or your company will perish or underperform in the new reality.

In order to best navigate a fast-moving and uncertain world, we benefit from seeing things in a multi-disciplinary way, from connecting dots between disparate ideas or fields. This is in fact the essence of creativity, and it helps us to better solve problems, and make better decisions in general.

However, so many talented people read the same kinds of books over and over, hang out with the same kinds of same-thinking people, or fall victim to online filter bubbles that just serve to harden pre-existing beliefs.

It is imperative that we ask “why” a lot, in order to develop a more nuanced understanding of the way the world works.

Consuming multi-disciplinary content, and challenging ideas with questions like “what’s the evidence to support that?”, “under which circumstances might this not apply?”, or “what’s the opposing argument?” helps us to develop a more refined world view, and one that is underpinned by a ‘strong opinions, weakly held’ philosophy — one where we are more concerned with getting closer to the truth instead of being ‘right’.