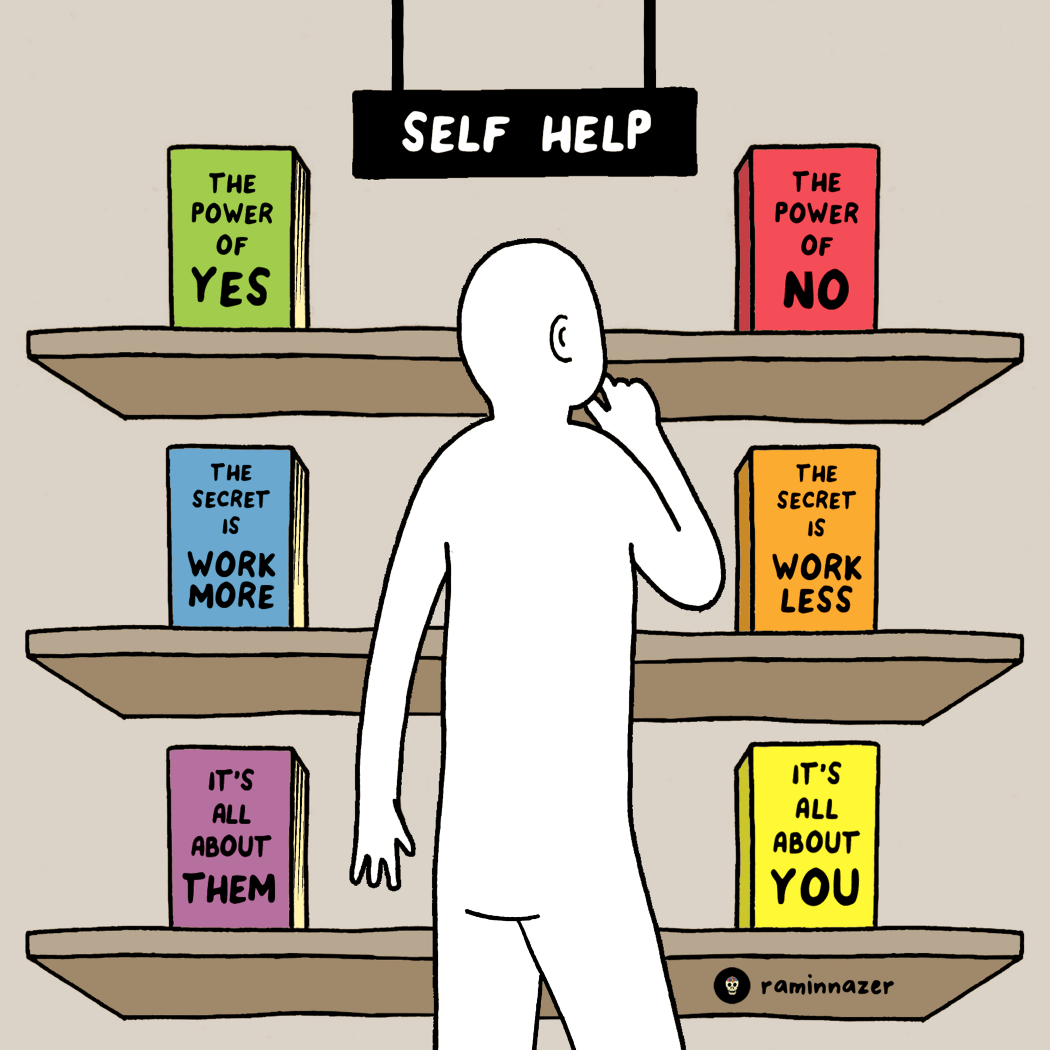 I think they do work, but that any tool is only as good as how you use it.

In my case, I’ve learned to be more deliberate about how I respond to stimuli from the Stoics.

I’ve learned to rapidly build prototypes and test my business model assumptions from the Eric Ries’ The Lean Startup (which led me to raise capital for my first startup on the back of a $2,000 MVP).

I’ve learned how to better conduct myself in intimate and interpersonal relationships from the likes of Esther Perel.

From other books, I’ve learned how to optimize my productivity, get better at selling, make better decisions, deliver an engaging keynote talk, build better habits, and break bad ones.

There are plenty of really good, dare I say life-changing self-help books that run the gamut from philosophy and psychology to business and motivation, alongside all of the bad ones.

Having said that, they can be useless. And here’s five reasons why.

It’s easy to read a self-help book or attend a ‘life coaching’ seminar and gain satisfaction just from the dopamine high that comes with finishing a book or reveling in the highs of the seminar.

But consumption is the easy bit.

Putting the lessons into practice, making changes, and executing requires an order of magnitude more effort, and that’s when the wheels fall off for most people. Oftentimes, it’s not the lessons that are inherently useless, but people’s non-application of them that makes them so.

When it comes to taking advice from self-help books, symmetry only exists if the circumstances surrounding the author’s success, or the case studies they present, were the same as yours when described action obtained a given result.

One must be objective when reading books and evaluating how this might apply to one’s own circumstances, and how it might not. A startup founder could read a book about how IBM reinvented itself, and while they might take some lessons from it, it’s unlikely to teach them much about, say, raising capital for a new venture. Similarly, some business advice may have worked in the 1990s, but the world has changed much since then thanks to the internet, and many lessons may no longer apply.

When we read self-help books from people who have scaled the summit, it’s easy for the book to be full of very specific things that worked, while discounting the things that weren’t as obvious — the failures — but were just as instrumental in getting to the top.

Not only that but for every successful person who followed hypothetical steps A, B, and C, there are probably hundreds who did the exact same thing but failed. This is partly to do with power laws and the nature of the universe, and partly to do with luck.

Finally, correlation does not equal causation. So while and entrepreneur might credit action X with result Y, it could have just have been a result of the myriad other actions that were in play at that point in time. Scientists often confuse the two — by accident or deliberately — so you can sure as hell bet that your Silicon Valley tech bro does too.

Like the narrative fallacy, it’s easy to attribute our successes to how awesome we are.

But what we often neglect to acknowledge is the role that luck — good and bad — plays in the success and failure of both ourselves and of others.

Sure, we may have done lots of right things on our way to the top, but per survivorship bias, you can do all the right things and still fail. Oftentimes, you also need a little luck to be on your side.

But before you hit the sofa and wait for Lady Luck to come calling, you can only increase your chances of being lucky by getting busy.

Many self-help books amount to hastily written business cards that are full of anecdotal advice and ‘because this worked for me, it’ll work for you too’. Such anecdotes can be subject to confirmation bias, cherry-picking, luck, the narrative fallacy, non-replicability, assymetry of circumstance, or just plain old nonsense.

The reality is that everybody’s circumstances, capabilities and goals are different. There is nuance in our lives and in our respective pursuits.

And a simple one-size-fits-all piece of advice usually fits nobody.

Rather than expecting one piece of advice to change your life, read widely and you will begin to see patterns emerge. Advice that tends to stand the test of time and run the gamut of literature. Apply it and see if it works for you. If it doesn’t, move on to something else. If it does, do more of it.

Always be adapting and never, ever stop learning.