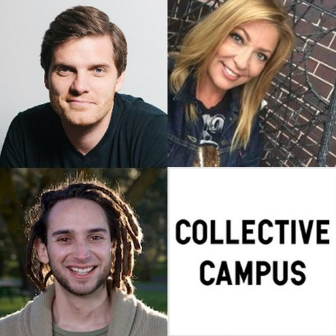 Collective Campus hosted Disrupt the Public Sector, its annual conference on innovation in Government, for the third time this year as part of the Australian Government’s Innovation Month 2017.

I had the pleasure of facilitating a panel discussion on the topic of how to ‘make things happen’ in Government - which loosely translates to how to we transform Government to one that attracts top talents, is adaptable in the face of rapid change and uses its position to create more impact in society, rather than hide behind the veil of using taxpayer dollars as an excuses not to innovate which is incorrectly perceived as being risky (it is if you take few large bets instead of many small ones) and outsourcing accountability.

Public sector spending in the Australian state of Victoria has almost doubled in the past 10 years, whereas in the private sector we see organisations like Netflix (entertainment), Khan Academy (education) and Minute Clinic (healthcare) achieving much more with much less in this time thanks to their ability to spot trends and opportunities and use emerging technologies to enable creating impact with less capital investment.

Imagine a Government, with its wealth of resources, that moved just a little bit more like a Netflix?

Entrepreneur, futurist & strategist Jamie Skella is considered a thought leader in technology design, building and advising businesses across AI, blockchain, exports, and even future food. Jamie is an Executive Director at MiVote, who are redesigning government to give people the opportunity to vote on policy issues as they arise - not just for policy packages every few years.

Alvaro is Co-founder and Managing Director of Code for Australia. Code for Australia is helping Australian Government’s move towards a platform that allows citizens, public servants and industry to come together and work on issues that affect us all.

Alvaro is also a social entrepreneur with a passion for public issues, technology and social change. In 2013 he launched Creative Suburbs, an online platform to help more people make a difference in their cities. He embarked on Code for Australia in late 2014 which led to launching Code for Aotearoa and a strong interest in government Every now and then he writes on urban issues for TrendCity.

Janna is currently the General Manager at BizLab, for the Department of Industry, Innovation and Science. Bizlab has recently been established with the mission to support the Federal government's national innovation agenda through driving innovation within the public sector to facilitate engagement with industry and assist Australian innovators in becoming more competitive both locally and on the international stage.

Either myself or one of my colleagues will be facilitating the panel on the day.

-Key challenges to innovation in the public sector

-The merits of an open government v a closed one

-What will Government look like in 20 years - does its role change?

-The perils of ‘not invented here’

-Why doing nothing costs taxpayers a lot more than changing

Watch the full video with audience Q&A at http://facebook.com/collectivecampus

Like us? It'd make our day if you took 1 minute to show some love on iTunes, Stitcher or Soundcloud by subscribing, sharing and giving us a 5 star rating.To sign up to our mailing list head to www.futuresquared.xyz

For more information on Collective Campus, our innovation hub, school and consultancy based in Australia and Singapore check out www.collectivecamp.us

Episode #396: SOWH1 - Why Disney and Generalists Thrive in a Pandemic World