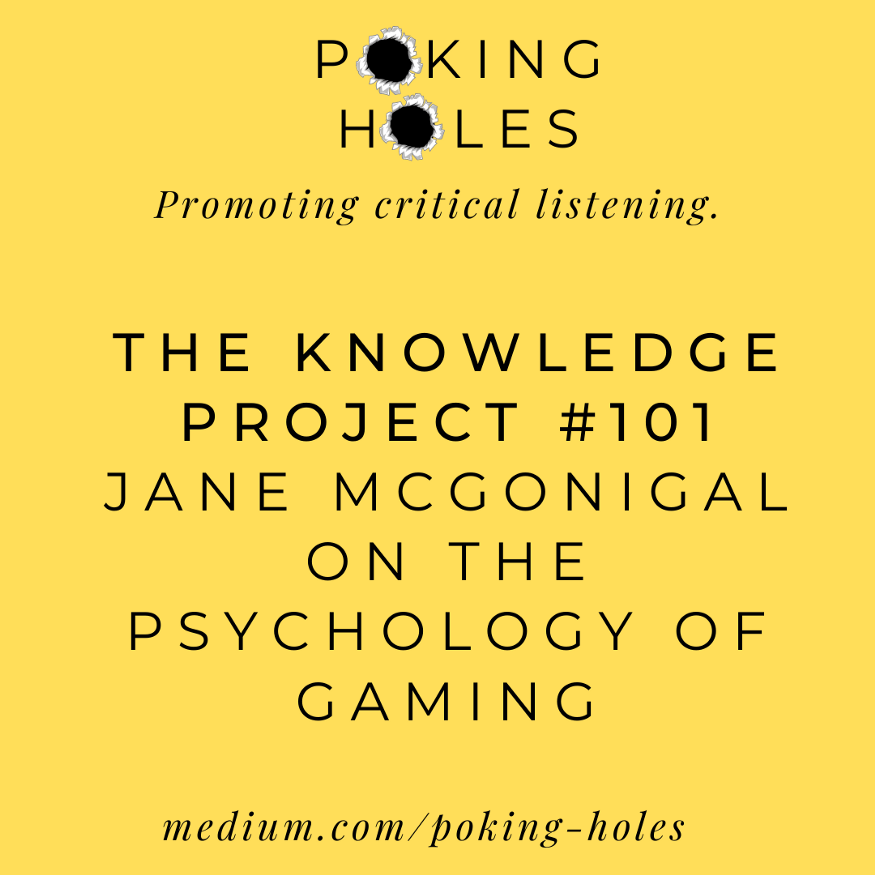 Jane McGonigal, PhD game designer and videogame advocate, appeared on The Knowledge Project podcast to talk about the psychology of gaming with host, Shane Parrish.

It was an enlightening and insightful conversation that went down many rabbit holes, but listening to it with a critical ear presented several holes that shouldn’t be overlooked.

As always, I listened for one of the five red flags that all may not be as it seems.

These red flags are:

The purpose of these articles is to promote critical listening and keep podcast hosts and guests accountable.

As someone who has appeared on many podcasts myself, I too have been guilty of the abovementioned red flags many times.

Poking Holes in Jane McGonigal: The Psychology of Gaming [The Knowledge Project Ep. #101]

The following is not an attack on McGonigal or her beliefs (I am actually fascinated by her work — you can both be a fan of someone and be critical of them), but a look at the language she used and the facts of the matter.

Her conclusions about video-games and the effects on human behavior might be true (eg. violent videogames don’t cause violent behaviors), but the evidence available suggests that things are not so black and white.

McGonigal said that “studies show” that games benefit us mentally and emotionally when we play up to 3 hours a day, or 21 hours a week.

First, I could not find any such studies (this doesn’t mean they don’t exist, just that I couldn’t find them — but I tried pretty damn hard and it shouldn’t be that hard to find reputable studies). If you can find said study or studies, please refer me. Typically, the conclusions of one study alone mean little, and you need to weigh up an entire body of studies to build faith in the conclusions drawn.

Second, this seems like a blanket statement. 21 hours for who exactly?

Reflecting on my own day, if I allocated three hours a day for videogames during my workweek, it would leave little time for anything other than work, sleep, and exercise. No time for socializing outside of Fortnite, no time for long walks in nature and sunlight, no time to pursue other interests. This doesn’t strike me as a well-adjusted or healthy life.

And when it comes to children, if your child is at school from 9 to 3, does homework from 4–6, eats dinner at 6, and plays videogames from 6:30–9:30 before going to bed, that leaves little time for playing outside, reading books, or pursuing other activities. The numbers don’t seem to stack up.

McGonigal also encouraged parents to have their kids play games before homework, which might seem counterintuitive. This is because of the benefit of ‘sleeping on a problem’. Our brain tends to focus on the most recent problem it encountered when we go to bed, so McGonigal suggests going to bed with a school-related problem (eg. calculus) before going to bed, instead of how to get past Level 10 on whatever game we’re playing.

This makes sense, and it definitely worth trying, but it discounts other facts.

First, there’s no shortage of literature — including the world-famous marshmallow test — pointing out the value of delayed gratification (in fact, The Knowledge Project’s Shane Parrish once said that this is the one thing that differentiates the successful from everybody else).

By playing videogames after homework, we’re learning to put in the hard work first before we get the reward. This is a very important life skill.

Second, do we really expect our kids to willingly go from indulging their senses in Fortnite to doing algebra? This seems like a less than seamless transition. Their mind is likely to still be focused on the game they just played than on what x means.

PS. Our ability to fall asleep can suffer when we engage in stimulating activities before bed. Insufficient sleep has deleterious effects on our emotional regulation, mood, and problem-solving ability the next day. As far as sleep is concerned, playing video-games earlier in the day is better than playing them just before bedtime, but as with anything, there are trade-offs.

McGonigal used absolutist language to say that there is “literally no evidence” that violent videogames cause aggression or violent behaviors. My own experience seems to support this, but independently performed studies by reputable institutions don’t.

It is true that some studies have found no evidence that violent games caused aggression, but the above-mentioned studies did. McGonigal’s claim that there is “literally no evidence” doesn’t appear to be true.