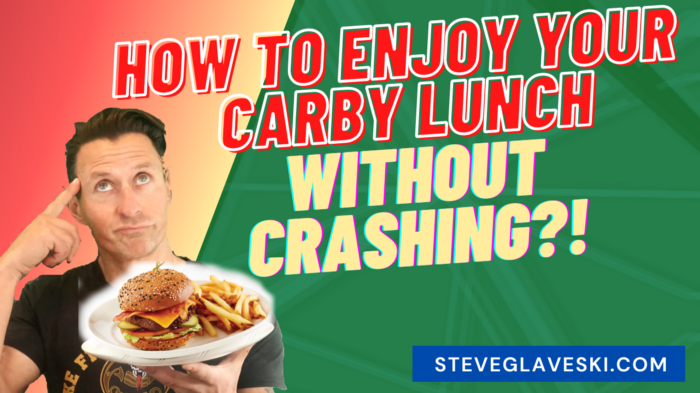 You’ve been there before.

You head out for lunch and against your better judgment, you order the burger with a side of fries, or the big bowl of pasta, or the pizza. You feel great in the moment, but it doesn’t take long for the food coma and lethargy to set in.

You get back to your desk, and quickly resign yourself to an afternoon of ‘nothing done’.

Sure, your body is present, but your brain has checked out for the day.

Why is this the case?

It has to do with High glycemic index (GI) carbs, also known as simple carbohydrates.

The consumption of simple carbs causes blood sugar to spike, and then crash….hard.

On the flipside, low GI or slow carbs offer us a more sustained release of energy — think certain vegetables, nuts, and ‘brown’ foods — brown rice, wholemeal rye bread, wholemeal pasta, and so on. But what if there was a way to eat that indulgent carby lunch, avoid the crash, and have a productive afternoon?

According to science, there is.

Numerous studies have found that physical activity after a meal, lowers the GI response, per the below.

How long should you move for?

It depends on the intensity.

A 2018 study published in Nutrients, found that blood glucose levels in study participants dropped after eight minutes of moderate-intensity cycling.

A 2009 study published in JAMDA, found that a 20-minute brisk walk post-meal was enough to effectively blunt blood glucose levels.

Meanwhile, a 2016 meta-analysis of 39 studies found that the best tactic for taming glucose surges was to perform light aerobic activity at about 60% of your VO₂ max (calculate yours here), 30 minutes after a meal for up to 60 minutes. This can be reduced to a 30-minute workout at higher intensities such as HIIT training, or skipping/boxing.

How soon after eating should you move?

If you grew up in a household like mine, you probably got told not to play straight after eating. Turns out the science supports this, at least as far as lowering our blood glucose is concerned.

The above-mentioned Nutrients study also tested whether one should exercise immediately after eating or wait a while. They found that the optimal point was to begin physical activity 45 minutes after meal commencement (so if it takes you 15 or so minutes to finish your meal, commence activity 30 minutes after you’re done).

A recent 2021 study published in the European Journal of Nutrition found that lemon juice can lower the glycemic response to bread in healthy volunteers.

It turned out that dousing the bread in lemon juice lowered the mean blood glucose peak by 30% — a significant number. Apparently, the lemon acts to increase acidity and with that, lower the pH levels of a meal. It serves to slow down the digestion of starch found in high-GI foods such as bread, potatoes, cereal, rice, and pasta.

So before you sit down to that bowl of pasta, maybe ask that neighbour with the big old lemon tree for a lemon.

Who’s to say you can’t just eat that burger and fries and get right back to work?

There are a wide range of now widely available lower-GI carbs that make for delicious substitutes.

For example, instead of the standard french fries, opt for sweet potato fries. The glycemic index of sweet potatoes, for example, is about 20% lower than normal potatoes. That’s not huge, but it helps.

Your burger and fries have never looked this good (for you).

So some simple tweaks to the kinds of carbohydrates you consume can leave you sans food baby, and more focused for the afternoon stretch. Not only that, but eating lower-GI carbs is also better for our waistline.

This is a pretty straightforward and intuitive one, but opting for the small fries instead of the large ones, taking the top bun off your burger (going convertible like I sometimes do), or eating a slice or two less pizza are obvious ways to lower your blood glucose response to a carby meal.

Far too often our society breaks things down into binary. Do this. Don’t do that. It’s often all about the extremes.

But by taking the Buddha’s middle path more often, we can have our cake and eat it too — we just need to be a little more intentional about how we do it.

Forget Returning to the Office — head to a Third Space instead.