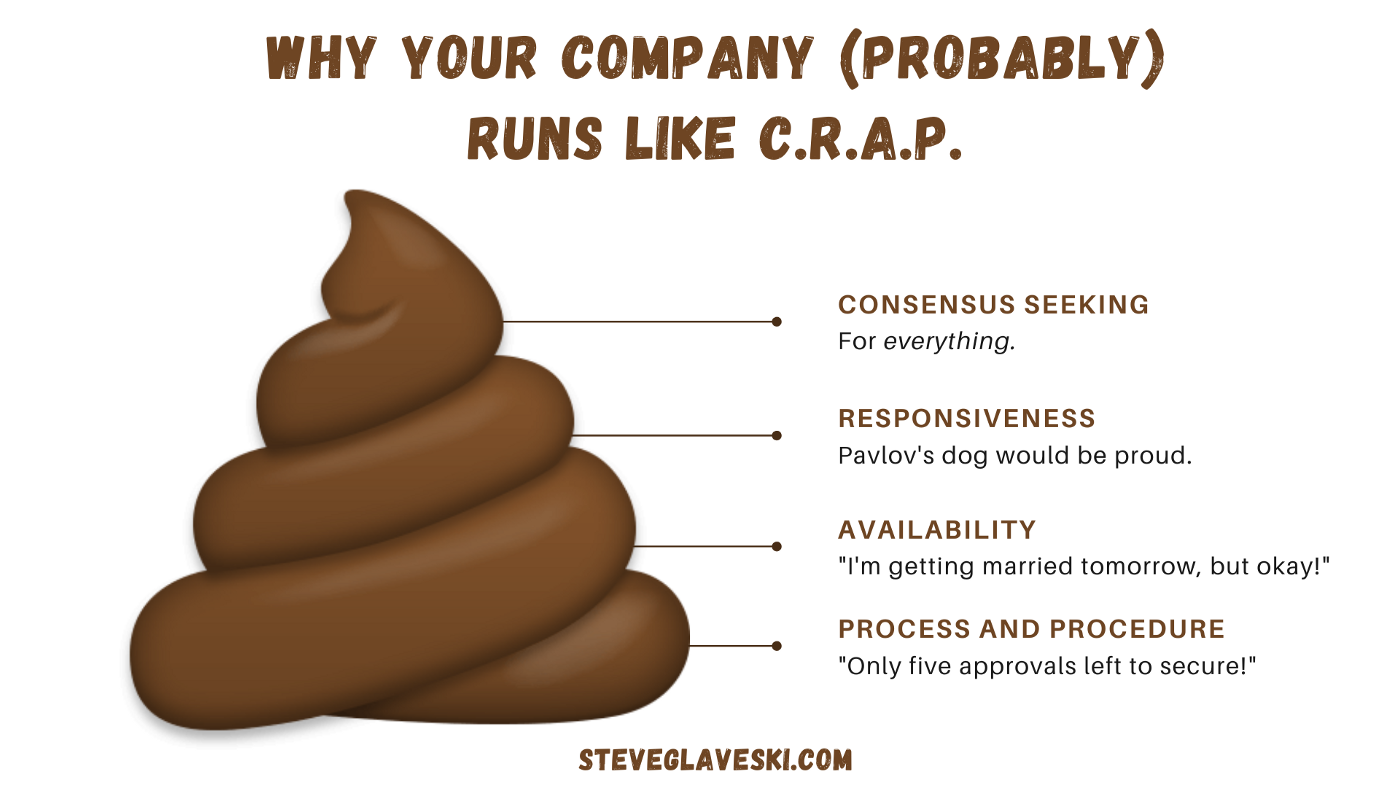 The eight hour workday is just one of the hallmarks of the industrial revolution that still characterises the modern company.

Back then, most of us worked on assembly lines and in coal-mines.

But the nature of work has in large part moved away from the packing of widgets into boxes, and towards knowledge work.

When it comes to knowledge work, what matters isn’t time but attention.

It turns out that we can actually get groundbreaking work done on just four hours of attention a day — as Charles Darwin did with his penning of the theory of evolution — four hours is in fact the upper limit for deep, focused work.

But most of us are lucky to get just one hour of focused work in.

Instead of taking ownership for our decisions, and learning from and correcting any mistakes, we treat all decisions as greatly consequential and wind up seeking consensus for everything, right down to the color of a button on our homepage.

We call one-hour meetings, and invite several other people along, to discuss arbitrary matters when the best teacher would be to just ‘suck it and see’, or as the Japanese saying goes, “genchi gembutsu” — go and see for yourself.

As a result of our shying away from taking ownership and leaning into outsourcing accountability, we move slowly, we learn slowly, and we adapt slowly — something companies can ill afford in a fast-changing business world.

Not only that, but as championship-winning football coach, Paul Roos, says, “leaders don’t empower people to make decisions, bad behaviours will permeate, and the few decision-makers become bottlenecks”.

Less C.R.A.P: Instead of seeking consensus for inconsequential and/or easily reversible decisions, we must take ownership instead, or empower our people to be able to take ownership (more on that later).

Only 15 per cent of employees worldwide are engaged by their work — that is, only 15 per cent are emotionally invested towards delivering on their organisation’s mission.

Six out of seven people you see out on the city streets and in the workplace, are either not engaged or actively disengaged. This is why your company is ‘probably one of them’.

In large part, this has to do with the fact that the modern organisation inadvertently sabotages attention and its people’s potential by way of counterproductive practices and norms which treat educated and capable adults like children.

One of these norms is the expectation that employees will respond almost immediately to internal and external correspondence, leaving them glued to their inboxes and IMs at all hours of the day, never cultivating time to think and mentally apply themselves — something they were probably hired to do.

Less C.R.A.P: Rather than expecting real-time responses, cognizant of Pavlov’s dog, we should practice asynchronous communication.

The reality is that most things don’t require an immediate response. For most things, a one-way email or instant message should do the job, with the recipient responding when it suits them.

Download Chapter One of my forthcoming book on workplace productivity, Time Rich: Do Your Best Work, Live Your Best Life, below!

We expect employees to always be available, manifest in constant taps on the shoulder, Slack messages, phone calls and ‘pulling people’ into meetings.

We have a tendency to schedule blocks of time in our colleague’s calendars for with absolutely zero regard for what they’re working on right now and how this interruption to their day might interfere with their goals.

This ties in to workplace stress factors such as low control over one’s job and environment, workload and office politics, which contributes to the finding that 55% of Americans report feeling stressed ‘a lot of the day’.

Less C.R.A.P: Instead of just expecting people to be available for you, recognize that they’re probably already working on something else, determine if their contribution is absolutely necessary (few things are), and then, and only then, check in with them and ask if this is something that they have capacity to help you with.

Despite our best intentions to get stuff done, we simply can’t because of a complex web of process and policy that not only stifles our efforts, but leaves us feeling useless and depletes our morale.

Oftentimes, companies have ‘delegations of authority’ that require sign-off from several people for tiny investments and inconsequential decisions. Getting said sign-offs can amount to herding cats, taking days and sometimes weeks to get the proverbial green light.

Processes are usually implemented to ensure we can deliver on a repeatable business model at scale, minimise the risk of misconduct and support continuity in the case of employee attrition.

But the approvals that underpin them ultimately get in the way of realising employee and company potential, and over time, leave us with the worst people on the bus, as more capable employees leave in search of more fulfilling and greener pastures elsewhere.

Less C.R.A.P: Implement a minimum viable bureaucracy to keep the ship moving, while supporting a change in direction. This will be found at the intersection of efficient delivery and employee autonomy.

Where To From Here?

If this sounds like your company, you have three choices: