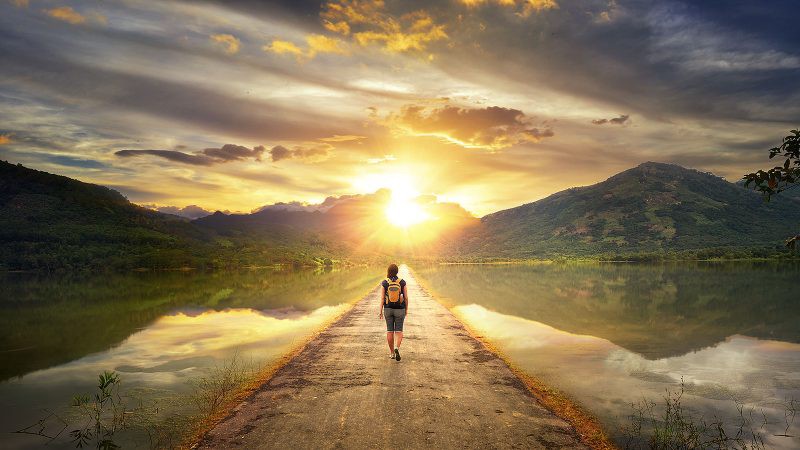 “You should become a writer”.

Apparently he had seen something in my persuasive and observational essays that warranted the words of encouragement.

But I had other plans.

You see, my parents had moved to Australia in 1971 from the former Yugoslavia to “save some money and move back home”.

Like most in their boat — figurative and literal — they never moved back home. However, they continued to value the accumulation of money — probably because they had very little of it growing up.

We are all products of our environment and I ended up inheriting much of their value system, especially when it came to money.

What Do You Wanna Do With Your Life, Kiddo?

At seventeen — I found myself sitting in a career counsellor’s office. I was asked the question that no seventeen-year-old with no requisite life and work experience would be able to reasonably answer — “what do you wanna do with your life, kiddo?”

I mumbled something back — “I guess I’ll study business…that will open doors to jobs… and money, right?”

This answer would be the spring launcher shooting my proverbial pinball into action. And said pinball would find itself exploring many far reaching parts of the pinball table over the next 20 years.

After some of what you might call j.o.b.s — one of which I gratefully got fired from — I supplemented my business degree with a Masters in Accounting degree and opened the door to financial and IT audit roles in the public sector in 2008.

As you might expect, this was mind-numbingly boring. Buoyed on by the words of my English teacher eight years earlier, I found the time to complete a remote certificate in journalism from some quasi-college called the Australian College of Journalism — a quick Google search informs me that this so-called college no longer exists.

Whatever the case, I applied what little I learned in this course to articles I successfully got published on topics of interest to me at the time. This included a piece for Inside MMA (a now defunct martial arts magazine), as well as a number of album and concert reviews for online music rag, Faster Louder (now Music Junkee).

However, I left the public sector in search of greener pastures (and more money of course), and spent the next several years consulting for the likes of EY, KPMG and Macquarie Bank, right through until 2013.

My brief flirtation with writing faded to black as I busied myself with climbing the corporate ladder.

While I didn’t love what I did at the time, my doubts were numbed by money, a sense of status, and a ‘work hard, play hard’ culture that suited me to a tee as a 20-something single male.

Not only that, but the institutionalisation that comes with working for a large organisation — “if everyone else is doing it, it can’t be so bad” — also helps us to bury our misery.

Despite this, I had an entrepreneurial itch to scratch, having run a heavy metal nightclub called Madhouse for a year (yep…see our first flyer below!), and come up with all sorts of ridiculous business plans for ideas that never got off the ground.

This included a ‘Maxi-Tap’ (a contraption that would poor four beers instead of one to keep lines short at music festivals — something that was clearly important to me at the time), and a retail outlet that sold protein shakes tentatively called ‘Pump Health Bar’.

However, at 30 — a good seven years ago — I read Tim Ferriss’ now classic Four Hour Workweek and decided I would give this business thing a proper shot.

Still employed by Macquarie Bank at the time, it started with a simple prototype for an office sharing marketplace called Hotdesk (think Airbnb for desk space and meeting rooms). Said prototype informed a press release I wrote which ended up in the hands of a cadet journalist at The Australian.

Surprisingly, said journalist covered my idea and on the back of the exposure it got me, I raised $150,000 from angel investors less than three short months later.

This was my ticket out of the corporate world — where I was increasingly finding myself miserably comfortable — and into a life of entrepreneurship.

Darkest Before The Dawn

It didn’t take long for the optimism bias to reveal just how real and damaging it is. I had no problem building up the supply side of Hotdesk to over 1,300 locations, but demand…that was a different story.

So after two years of building, learning, pivoting and ultimately failing, I wound up Hotdesk.

But it was my experiences in the corporate world, and digesting every piece of knowledge I could get my hands on in the entrepreneurial space thereafter, that prompted me to establish Collective Campus in 2015 — now a five-year-strong consultancy that works at the intersection of large corporations and startups — named one of Australia’s fastest growing new companies in 2018.

However, having jumped into a relatively crowded consulting market, we had to differentiate ourselves.

We didn’t have tonnes of money to invest into advertising, so what did we do?

I started a podcast back in 2016 to further support our content marketing and brand awareness efforts called Future Squared (below) — a podcast that is now over 370 episodes strong, and has helped me to develop relationships with and learn from some of the brightest minds in their fields — James Clear, Adam Grant, Seth Godin, Gretchen Rubin, Kevin Kelly, Tyler Cowen…you name it.

I was unwittingly building a platform — something that would come in handy later.

Given I had made the jump from employee to entrepreneur with some degree of success (either by design, luck or sheer persistence — I can’t tell you which…probably all of the above), I had found myself fielding the following question countless times.

“How do you make the jump from corporate to entrepreneur?”

Having built up the confidence to write a book through my blogging and ebook development, I reached out to one of my former podcast guests, Tim Harford — bestselling author known as the ‘undercover economist’.

He provided me with some guidance on developing a book proposal and pitching it to publishers and agents.

Business was good, and so around this time I hired a business development manager. After learning about my desire to get published, he revealed that it just so happened that he knew some folks at Wiley, one of the world’s biggest publishing houses, and so he made an introduction.

Long story short — that introduction, several conversations thereafter and the platform that I had unwittingly developed, led the book deal for Employee to Entrepreneur: How to Earn Your Freedom and Do Work That Matters (2019).

Employee to Entrepreneur by Steve Glaveski

Author, Not a Writer

Despite being a published author, I still had no intentions of being a writer, per se. Whenever anybody asked me what I did, writer didn’t even scratch the surface.

It was around this time that I started to contribute a lot more guest posts to other publications.

One such guest post was to Harvard Business Review — The Case For The Six-Hour Workday.

The article blew up.

It was syndicated by the Wall Street Journal, Yahoo! Finance, CNBC, Daily Mail, NZ Herald, European CEO, Tech in Asia and numerous other publications around the world.

This interest in this article led to my securing a subsequent book deal with Wiley to write Time Rich: Do Your Best Work, Live Your Best Life (now out in October 2020 due to COVID-19).

It Took a Global Pandemic To…

The COVID19-inspired lockdown has pre-empted one of the most creative periods of my life. I’ve been writing almost every day.

It has been during this time that I finally came to the realisation that I am happiest and most immersed in my work when I am writing.

This glow lasts long after I have finished writing, thus making me a more positive and happier person around others.

I had decided to become a writer.

The Value of Broad Experiences and Specialising Later

My story echoes what David Epstein writes about in his book Range: How Generalists Triumph in a Specialized World. He found that while early-career specialisers earned more than others after college, later specialisers made up for the head-start by finding work that better suited their skills and personalities — the technical term is ‘match quality’.

Succeeding early can actually be detrimental to your living a fulfilling and rewarding life, because you might find it difficult to do away with the sunk costs of having invested in developing your career, as well as the financial rewards that early success might bring. It makes it harder for you to justify getting out there and trying other things.

And that’s precisely what Robert Greene, author of bestselling books such as the 48 Laws of Power, suggests we should do, especially during our 20s.

Greene said the following in an appearance on my podcast.

“Use your twenties as an apprenticeship and accumulate skills, perhaps two or three strong skills, work across different fields and have broad experiences. This will make you more creative and help you determine where your purpose, strengths and true inclinations lie. Take advantage of that.”

Episode #304: Robert Greene on the Laws of Human Nature

Steve Jobs talked about the value of ‘connecting the dots’, and it is having broad experiences that will give you the ability to connect the dots, or give you the associational thinking to be more creative, and become a better problem solver and decision maker.

Like Chrichton, I too could not have written Employee to Entrepreneur, or Time Rich, or scored a book deal, without the requisite life experience. I definitely would not have scored myself a book deal without it.

Spoiler alert: It’s a little like the story of Santiago, the young shepard and central character from Paulo Coelho’s classic, The Alchemist. Santiago goes on a far reaching journey across the desert in search of treasure…only to learn that the treasure was at his feet the entire time. However, he would not have learned that unless he want on the journey.

The Journey Reveals the Way

In my case, the journey was marked by several career changes, successes, failures, lucky encounters, serendipity, perseverance, broad experiences, and no doubt a whole lot of unconscious goings on that brought me to the so-called treasure.

It took me several hundred blog posts, articles, numerous ebooks, three-self-published and two actual-published books, and perhaps even…a global pandemic, to realise that my means to an end — writing, was actually an end of sorts in itself.

It wasn’t enough to be told.

I had to discover this myself, even if it took two decades.

I’m now a little older, and I hope a little wiser, than I was at seventeen.

I know that more money won’t necessarily make me happier — doing interesting work that you find intrinsically motivating will.

And if I do that well, then the money will follow anyhow — just don’t expect it overnight.

With that, excuse me as I set off to write my old English teacher an email to share that I’ve finally taken their advice.