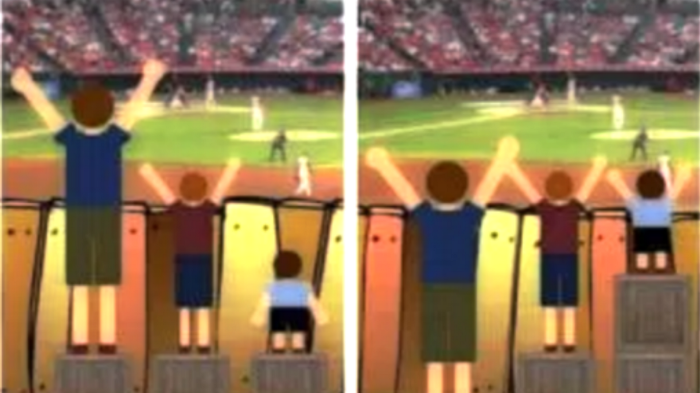 In the days leading up to the 2020 US Election, Kamala Harris released a video dubbed Equality v Equity.

In it, she depicted two men - one white, the other Black - climbing up a mountain. The white man has access to a rope, whereas the Black man also has a rope but it is out of reach. As a result, the white man reaches the summit whilst the Black man stays at the foot of the mountain.

In the video, narrated by Harris, she says that “it’s about giving people the resources and support they need so that everyone can be on equal footing, and then compete on equal footing”, which in and of itself is an admirable world view, albeit not a very realistic one.

Competitions have winners and losers.

Starting everybody off on equal footing does not mean they will end up in the same place, nor should it.

Usain Bolt might’ve started in the same starting blocks as his fellow sprinters in the 100 metre dash, but only he went on to win gold at the 2016 Olympics because he was the first one to cross the finish line.

Bayern Munich and Paris Saint-Germain might’ve both started the 2020 Champions League Final at nil nil, but Bayern Munich went on to lift the coveted trophy because they scored more goals.

We might both work in sales for the same organization, but one of us will earn a higher  commission because we closed more sales.

Success and outcomes are the byproduct of myriad factors, most of which are attributable to our biological nature and our experiences - not just our baseline opportunities.

This is why two white male siblings who grow up in a middle-class family might end up with a vastly different net worth, despite being given the same opportunities - hello Sylvester and Frank Stallone.

The factors I elude to above extend but are not limited to talent, demeanour, persistence, mindset, character, IQ, EQ, assertiveness, conscientiousness, our profession, and of course… luck.

In addition, we’re genetically predisposed towards different kinds of work, and as a result, how much we earn. A 2009 meta-analysis on differences in interests between men and women found that while men prefer working with things, women prefer working with people. This explains why 88% of registered nurses, 76% of HR managers, 85% of primary school teachers, and 68% of secondary teachers are female — because these are people-centric professions.

Not only that, but we create opportunities based on our actions. If I am better networked than you, or have more capital to invest, then it might be that I was born on easy street, but it just might be that I worked hard, put in the time, made smart decisions, and am now enjoying the fruits of my labour. The more successful you become, the more opportunities come your way.

So let’s break this down. If I am twice as thoughtful, work twice as hard, and generate twice as much income for my company, should you earn just as much as me?

These are obvious rhetorical questions, yet they strike at the heart of what’s wrong with ‘equality of outcome’.

As former women’s bantamweight UFC champion, Ronda Rousey, put it when pressed by a female sports journalist on the gender pay-gap in sports, “I think that how much you get paid should have something to do with how much you bring in. I’m the highest paid fighter not because Dana and Lorenzo [UFC president and former CEO] wanted to do something nice for the ladies. They do it because I bring in the highest numbers. Because I make them the most money. So I think the money that they make should be proportionate to the money they bring in.”

This is echoed by player salaries in the NBA versus the WNBA. The NBA generates US$7.4 billion per year (compared to the WNBA’s US$60 million), so it makes sense that one of its biggest stars, LeBron James, makes US$37 million a year, and that the WNBA’s stars make a fraction of this.

This equality of outcome rhetoric, which is essentially the central premise of Marxist socialism, might be utopian in some respects, but it lends itself to myriad devastating consequences - many of which we have seen play out in the various socialist experiments of the 20th Century.

Here’s why it is flawed.

Equality of outcome is unnatural

Human beings didn’t artificially create hierarchies - they are in fact a feature of nature common to all mammals, birds, fish and insects. Known as dominance hierarchies, such social pecking orders occur naturally when living groups compete for access to limited resources and mating opportunities, as it is preferable to fighting to the death on a daily basis.

Game theorists point to this concept in the game of chicken. In this game, popular with teenagers, actors drive vehicles towards each other with the option of proceeding straight or swerving. If both drivers go straight, they crash, and so it is assumed that at least one of the drivers (the more submissive of the two) or both will swerve in order to avoid catastrophe.

The same view holds up in in biological literature. The Hawk-Dove game, coined by John Maynard Smith and George Price, assumes that the cost of a fight between a hawk (dominant) and a dove (submissive) is almost always less than the cost of a fight, and so a fight generally does not ensue. More on this below.

This is why we aren’t constantly fighting each other on the city streets, because the cost of living in such a society is far greater than the benefit of reaping its rewards (stability, freedom, shelter, sustenance, sex and so on). Fighting on the streets is common in societiess where resources are scarce and competition is high - as might be the case in a war torn city or a famine plagued town.

In a stable society, we can cooperate and work towards mutually beneficial outcomes, but we do so by consciously or otherwise conforming to our own dominance hierarchies. Imagine walking around on edge all day - living in fear of predators or constantly on the lookout for easy prey, our lives would be stressful and exhausting, and we might find ourselves voluntary in lockdown ad infinitum. Hence why we concocted ways to work together rather than fight, and developed societies and systems to quell violence and theft. The chart below depicts homicide rates per one hundred thousand people in Europe from the 1700s to the late 20th Century.

If we are all going to end up in the same place, then why should I work any harder than you?

Why should I toil away to improve my opportunities and access to resources if an almighty hand is just going to come down from above and ensure I end up at the same place as somebody who sits on the couch all day watching Netflix?

A society of slackers is unlikely to be all that progressive.

In fact, we’ve seen this play out recently in Australia, where generous Government lockdown handouts for jobseekers and the temporarily stood down have rendered many reluctant to get back to work, as the Australian Financial Review reported. “I make just as much with the grant, except I don’t have to work” is commonly heard.

High taxes are an effective way to model the effect of equality of outcome on innovation, because high taxes effectively diminish the return on investment, and therefore the incentive to invest time and money in the first place.

Various suggest that high taxes have a large negative impact on innovation. In fact, one study found that a one percentage point increase in the median or top tax rate is associated with a 4 percent decline in patents, citations and inventors.

Whilst redistributing wealth is a tax policy that might solve for short term inequality, and help give socioeconomically disadvantaged people a leg up, over-taxing effectively amounts to a short-term view and undermines society at large, which ultimately benefits from innovation-led growth in the long-term.

As Karl Marx noted in Das Kapital, the ‘ruling class’ will never relinquish its power voluntarily, and so force or coercion is necessary - the dictatorship of the proletariat.

Given that equality of outcome is inherently unnatural, forced interventions are required to put everyone in the same place. This effectively amounts to authoritarianism whereby a central body ultimately plays God at the expense of people’s own free will and agency.

Suggesting that all people not being in the same place is a result of systemic problems creates and perpetuates a victimhood narrative, and takes the spotlight off one’s own actions.

Yes, there are indeed people growing up in the US, Europe and Australia, who start off in a less than advantageous position. Yes, we should do what we can to improve the opportunities that such people have. But we should ensure that we don’t lose the value of discipline, persistence and hard workin the process.

If I am a victim, then I am effectively foregoing my need to do anything about it.

Not only that, but there are countless examples of both white and Black people from humble beginnings going on to live successful and full lives that I am choosing to ignore or discredit.

If we artificially put the less than optimal candidates in roles in order to satisfy quotas, we ultimately end up with less than optimal decision-making, which not only affects the performance of said company, but the value said company delivers to society, how many people said can hire and how much it can pay them. At a collective level, this can have devastating downstream economic consequences. Ultimately, one person’s expenditure is another’s income, and if we spend less, then we all suffer.

Equality of outcome destroys our freedoms

It turns out that we’ve tried this equality of outcome thing before, and the above held true. Not only that, but in the Soviet Union alone, no fewer than 20 million people were put to death by the dictatorship of the proletariat, one that frowned upon independence of thought.

What we should do instead

There is no disputing that people, not just in the United States but all over the world, start off in different places.

There is no disputing that we should do what we can to improve the opportunities that young children in particular have to access education.

There is no disputing that adults, and young parents in particular should have access to opportunities to help them better provide for their children and set positive examples.

Doing this will have a positive flow-on effect for society at large.

But let’s not confuse helping people compete on an equal playing field - something which is ultimately a positive endeavour - with having them all end up in the same place - something inherently dangerous and negative. Let’s not downplay the role of character and persistent application of effort when it comes to our outcomes.

The foundation of today’s modern society was built by farmers, and like them, we too should reap what we sow - unless of course we are socialist farmers, in which case the State reaps what we sow.