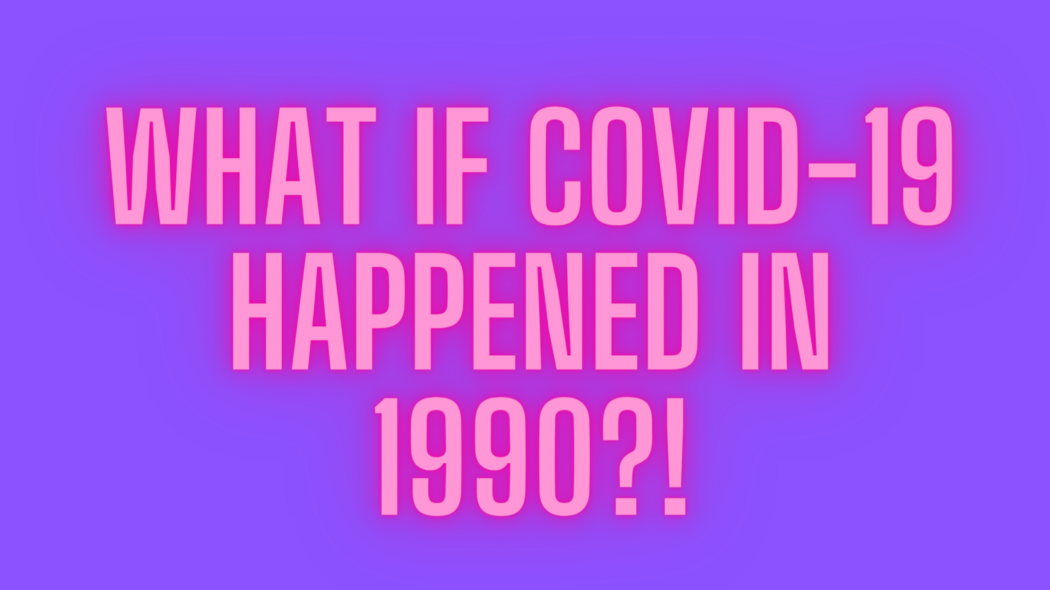 Thought experiments force us to think through the consequences of one or more variables surrounding a particular topic being different, and what the consequences of this might be. They can be useful in seeing the other side of an argument by playing the counterfactual, by understanding the role that technology plays in our lives, and sometimes, they can just be plain old fun.

In the spirit of the latter, I spent a little time thinking through how things would have been different if COVID-19 lockdowns took place, not in 2020, but in 1990 — before the internet, and how it would have impacted our daily lives, our work, our politics and so on, with nothing but essential services open for business.

Can you think of any others? Let me know in the comments!

Scenario 1: Many of us would find ourselves on extended holidays, finding it almost impossible to do meaningful work remotely for more than a few days without email, instant messenger, and access to key documents.

Scenario 2: Given most of the white-collar world would struggle to work remotely, and this would be devastating for our economy (even more so than it has been in 2020), then stay at home orders would likely not have been in effect for white-collar professionals, mimicking the realities that face many blue-collar and essential retail workers today.

No Netflix. No smartphones. No Spotify. No podcasts. No internet connection.

In light of this, we would have spent more time:

UberEats is still a good quarter of a century away in 1990.

So, it’s likely that you’d find yourself eating a whole lot more Italian and Chinese food, two staples of the home delivery market before the likes of Deliveroo, MenuLog and Uber Eats made food delivery a widespread practice for all cuisines. That’s a lot of pizza and noodles.

You’d order take-out a lot more, and actually get off your butt to walk or drive down to your favourite restaurant to pick up your order, burning a few extra calories in the process.

The internet has created enormous value for society, but it has also created a lot of problems — one of which is giving everybody a voice. As sociologist, Neil Postman, put it in 1969, “the invention of new and various kinds of communication has given a voice and an audience to many people whose opinions would otherwise not be solicited, and who, in fact, have little else but verbal excrement to contribute to public issues”.

So, it is likely that questionable ideas like 5G causing the virus would fail to gain traction, nor would wearing a mask become so politicized — it might just remain something you wore as a precaution against a virus shrouded in uncertainty. Fringe ideas would not seem to be the ideas of the majority — as they are on Twitter — and go on to influence the click-hungry media to publish almost exclusively content designed to outrage and ultimately divide us.

The business model of most media companies would still be to sell ads, but these would be resigned to traditional newspaper, magazine, radio and television outlets, and without the commoditization of media to worry about, they could focus not on being first and capturing eyeballs, but on actual creditable journalism.

We Are The World version 2

Instead of a cover of John Lennon’s Imagine, the stars of the day would come together for We Are The World version 2, featuring the popstars of the day — Sinead O’Connor, INXS, Bon Jovi, George Michaels, Madonna, MC Hammer, Elton John and Michael Jackson.

Meanwhile, the rock bands of the day would get together to record their own jam for MTV’s Headbangers Ball, and it would feature Guns n Roses, Motley Crue, Megadeth, Metallica, Judas Priest, Skid Row, Alice Cooper, and Aerosmith.

Today’s NBA TV deals are worth over US$25 billion, but in 1990, the NBA’s TV deal with CBS was worth just US$47 million. This echoes the realities of every code during the time. It has only been in the ensuing decades, with cable TV, and then the internet opening codes up to much larger audiences, and 10-figure TV deals. This is why star player salaries jumped from several million dollars (Charles Barkley was on $5.7million in 1990/91) to $37 million today for the likes of LeBron James (a seven-fold increase).

Today’s TV deals and internet streaming services offer scale and are lucrative enough to justify playing in front of empty stadiums. But with the meagre TV deals of 1990, it might have been almost impossible to justify playing games sans gate receipts. The same might have held true for the English Premier League, the NFL and Major League Baseball.

The season might have progressed, but not without a massive cost cutting exercise.

So many people being stood down by their employers, or laid off altogether, have taken advantage of the internet and the low barriers to entry it delivers, to start their own online businesses during the pandemic.

But in 1990 online businesses weren’t a thing, and the types of businesses that you could start generally required a significant amount of capital upfront, and a lot more ambiguity to navigate.

Nowadays, you can create an online shopfront with Shopify for $29 a month, but the cost of a brick and mortar retail outlet alone would have cost you hundreds of dollars per week in 1990.

Without the convenience, temptation and temporary anxiety-quelling effects of online retail therapy, and Amazon’s 1-click ordering, we might find ourselves buying less of what often amounts to junk online, and saving a lot more money.

That is of course if we managed to hold on to our jobs in the first place.

Letters Would Be Booming

Back in 1990, the cost of a local call could set you back just 25 cents, but long-distance calls could quickly set you back hundreds of dollars if you weren’t disciplined. As a result, we used to send a lot more letters to loved ones interstate and overseas in 1990, and so this market would be booming.

Fortunately today, we can keep in touch with a Whatsapp or Facebook message — but curiously, communication might have become commoditized but the quality and depth of many of our online exchanges often pale in comparison to the carefully crafted letters we used to write.

People Would Be Getting Fat

There’s no doubt that many of us will come out of lockdown a little plumper around the edges, but today’s world is a lot more health-conscious than it was in 1990. Smoking is basically banned everywhere. High protein low carb, vegan, paleo, keto, and organic permutations of almost any food you can think of are readily available at your local grocer. Gyms of all varieties — powerlifting, CrossFit, pilates, yoga, HIIT, MMA, boxing and so on — are on virtually every corner. And this is all manifest in Instagram being full of both live-streamed workouts, as well as…booty pics.

Sure, people worked out in 1990. Gyms existed in 1990. TV aerobics classes were a thing in 1990. But working out was the exception to the rule. Nowadays, it is for most people, the norm.

This is why weight training equipment flew off the shelves shortly after the pandemic hit, taking many retailers months to replenish their stock.

In lieu of this, 1990’s locked down peeps might have found themselves coming out of lockdown with more than just a few extra kilos.

‍These are just some of the consequences of COVID-19 taking place in 1990.

What others can you think of?