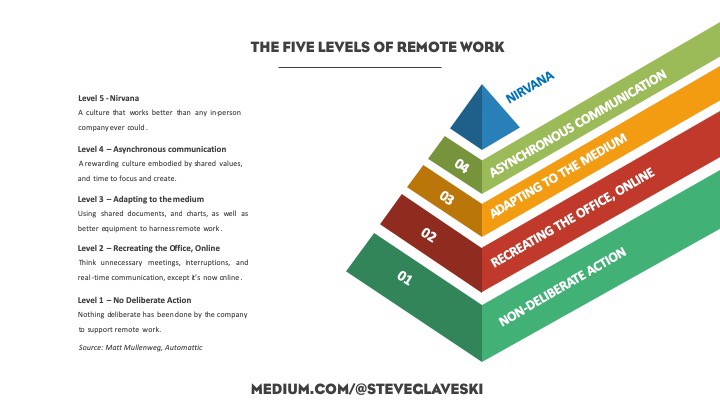 COVID-19 has forced companies the world over to enact — or create — remote working protocols. The likes of Box, Amazon, Airbnb, Facebook, Google and Microsoft have all told their employees some variation of “work from home”.

But so too are more traditional organisations across fields such as real estate, accounting and local government.

Zoom team-selfies, like the one below, taken by giddy corporate executives who have been long-time remote working laggards, are polluting Twitter and LinkedIn feeds.

But like most things worth doing, there are different levels of proficiency and sophistication to scale.

Many newly-remote workers seem to conflate simply downloading Zoom, Slack, and having access to email with having this remote working thing sorted out.

But having a ball and a ring does not an NBA basketballer make.

When it comes to swimming in the deep end of the remote working pool, few companies are doing it better than Automattic — the company behind Wordpress, which powers 35% of all websites on the internet.

Automattic — at the time of writing — has 1,170 employees scattered across more 75 countries, speaking 93 languages. It boasts a company valuation of US$3 billion, and has made several significant acquisitions such as that of WooCommerce and blogging platform, Tumblr.

The company does not have an office, with its employees collaborating almost exclusively online.

Automattic’s founder, Matt Mullenweg (hence the double t in the company’s name!) recently appeared on Sam Harris’ popular Making Sense podcast (below) to talk what he calls the five levels of distributed teams (he prefers ‘distributed’ to ‘remote’ because the latter implies that there is still a central place of work).

Encouragingly (for me at least), Mullenweg’s sentiments echo what I’ve been telling many of my clients and partners —tools are only as good as how you use them. In fact, abuse of tools can actually make us less productive — as seen here.

Following is my interpretation and paraphrasing of Mullenweg’s sentiments on the five levels of remote work. Apologies to Matt if I have taken anything out of context!

The Five Levels of Distributed Teams

Nothing deliberate has been done by the company to support remote work, but employees can still keep the ball rolling somewhat if they’re at home for a day.

They have access to their smartphone, and email. Perhaps they dial in to a few meetings.

But they’ll put off most things until they’re back in the office, and will be a shadow of their office-bound selves.

Level 1 is where the overwhelming majority of organisations were prior to the COVID19 outbreak.

This is where most organisations now reside — especially traditional ones.

It’s where your employees have access to videoconferencing software (eg. Zoom), instant messaging software (eg. Slack) and email, but instead of redesigning work to take advantage of the new medium, teams ultimately end up recreating online, how they work in the office.

This extends to many of the bad habits that permeate the modern office and suppress the ability of knowledge workers to actually think — here’s looking at you 10-person video-calls when two people would suffice, 60+ interruptions a day — now via Slack and phone calls, the sporadic checking of and responding to email more than 70 times a day throughout the day, or the hyper-responsiveness that is expected of all employees, leaving them wired to desktop dings like Pavlov’s dog.

Mullenweg equates lack of redesigning work around the medium with the radio drama of the 1930s, which was essentially the acting out of plays over the airwaves. Adapting the content to the radio medium was not fully considered or appreciated at the time.

At Level 2, people are still expected to be online from 9 to 5, and in some cases to be subject to what essentially amounts to spyware, with employers installing screen-logging software, such as RescueTime, on their employee machines so that they can play the role of Big Brother (see the Dictator’s Guide below for more like this).

If you’re at Level 2, you still have a long way to go.

Level 3: Adapting to the medium

At level 3, organisations start to adapt to and take advantage of the medium. Mullenweg points to shared documents (such as a Google Doc), that is visible to all and updated in real-time during a discussion, so that there is a shared understanding of what is discussed and decided, eliminating the risk of lost in translation errors and time wasted thereafter.

It’s at this stage that companies start to invest in better equipment for their employees as well, such as lighting for video-calls and background noise-canceling microphones.

In fact, Mullenweg says that most of the company’s hiring is performed via text as opposed to candidate phone or vide calls.

When it comes to meetings:

‘I’ll get to it when it suits me.’ This is the nature of asynchronous communication.

The reality is that most things don’t require an immediate response. For most things, a one-way email or instant message should do the job, with the recipient responding when it suits them.

If something really is urgent, then the mode of communication should reflect that. Pick up the phone, or tap that person on the shoulder, but only if it is truly urgent.

Aside from the obvious and massive benefit of giving knowledge workers time to think, create and get into the flow state (a psychological state whereby we are up to five times more productive according to McKinsey), but asynchronous communication predisposes people to making better decisions.

As Robert Greene says, if you want to cut emotion out of the equation, increase your response time. Giving people time to think between question and response, rather than fall victim to blurting out the first thing that comes to mind in a meeting or when tapped on the shoulders, delivers a compound benefit to the organisation over time.

In order to avoid tennis games and duplication of effort, ensure that asynchronous messages:

Attached is the incorporation document for our new spin-off company.

Please sign the document where requested and send it back to me by 4 pm this Friday.

Companies that truly practice asynchronous communication have stepped out of the industrial revolution, and no longer conflate presence with productivity, or hours with output, as one might on the factory floor.

Mullenweg points out that globally distributed teams, who work asynchronously, and master ‘passing the baton’, can get three times more done than a local team relying on everybody to be in an office between 9am and 5pm.

I’d argue that they could get an order of magnitude more done than a centralised company characterised by real-time and over-communication, as well as consensus-seeking meetings with everybody but the office dog present.

The Case for the 6-Hour Workday

A factor that went undiscussed in the conversation was that of chronotypes.

Science suggests that our preferred sleeping patterns — our chronotypes — are programmed at birth. People are either night owls or early birds.

our preferences for one or the other are encoded in genes called ‘clock’ or ‘period’ genes that regulate our circadian rhythms, and are linked to our blood pressure, metabolism, body temperature and hormone levels.

Several studies have found that about 30 to 40 per cent of the population are night owls, which means that the modern 9-to-5 workday is sabotaging the creative and intellectual efforts of almost half the workforce.

Stierwalt said that work days usually start between 7 and 9 am. However, night owls can experience ‘social jetlag’ if they wake up this early — that is, they can feel like they would if they had jetlag after an overnight flight. Early risers are less likely to experience social jetlag, giving them an advantage over night owls.

Studies show that while early risers are more alert in the morning, night owls show stronger focus and longer attention spans 10 hours after waking than their early-bird compatriots.

Asynchronous companies give night owls more flexibility to start their day later, so long as there is a workable overlap between them and their colleague’s day.

Automattic is at Level 4, says Mullenweg.

This is where your distributed team works better than any in-person team ever could. Mullenweg equates this level with having more emphasis on ‘environment design’, insofar as the organisation’s culture, and the physical environment people work in is concerned.

Of course, there are pros and cons with most decisions.

Three big cons or concerns that face newly remote teams, and how to counter them, can be found below:

Instead of telling their employees to be at the office 11 months a year, and have 4 weeks off, Automattic flips the script. Employees have 11 months of remote work a year, and have to make time to travel for up to 4 weeks a year for team bonding and building events.

They also make use of custom-built apps which keep track of who has met who, and then assign seats, say at a dinner party, so that people sit with people they’ve not yet met before.

With everybody working online, you miss out on watercooler conversations, overhearing other people say something that you can help with, or just having a general awareness of your team’s activities by virtue of being within earshot of discussions.

To counter this, Automattic use a Wordpress plugin called P2, which acts as an internal blog, and a place where an incredible amount of conversation and activity is chronicled and captured.

Mullenweg points to endpoint security —computer networks that are remotely bridged to client devices — and used for BYOD such as laptops and smartphones.

The alternative — being inside the office wall, as Mullenweg says —essentially becomes a single point of failure, and compromises depth in defence.

What we should be doing instead is rather than over-emphasising just access control, we need to be protecting against malicious behaviours. With over 70% of IT hacks using social engineering to get inside, he has a point.

Working from home is, for the moment, a privilege and not a right for many, so let’s be more intentional about how we work, show that we can be more productive away from the office, and earn the right to work from wherever we please more often.

13 Tips to Crush Working From Home During COVID-19