The Difference Between Design Thinking, Lean Startup, and Agile 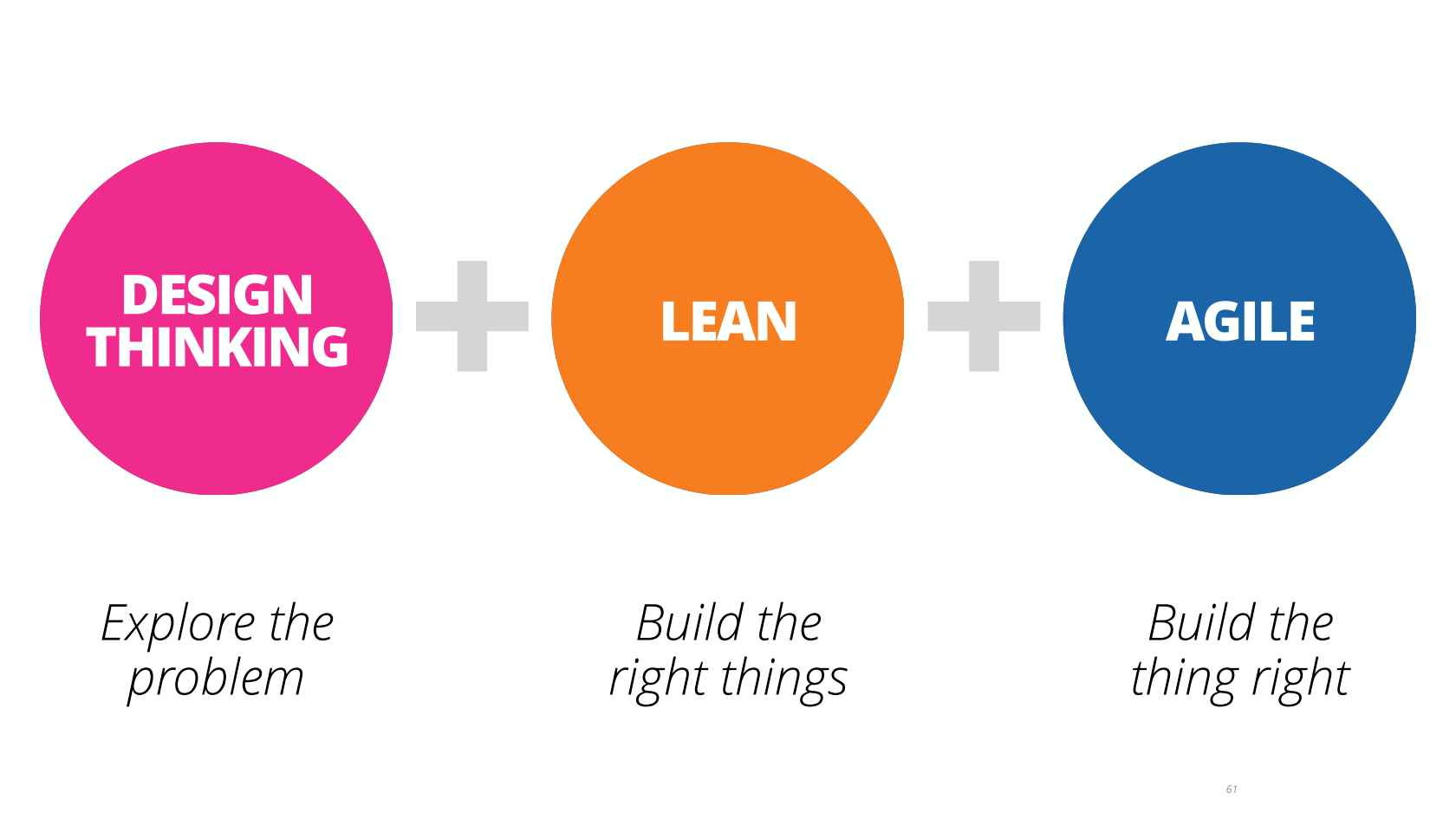 As more large companies begin to embark upon audacious transformation plans and set up innovation teams, more corporate professionals are being introduced to a world in which terms like design thinking, lean, agile, pivot, experiment, fail, adapt and so on are used almost interchangeably.

Many fall victim to the law of the instrument bias and after attending a one day design thinking workshop, load all of their eggs into that one basket, maintaining a firm belief that design thinking is the silver bullet solution for their innovation woes, but as I detailed in a previous blog post, design thinking is only one step in the process.

With that, I often get asked by professionals new to the space what the difference between design thinking, the lean startup and agile is and the answer forms the basis for this article.

Design thinking refers to creative strategies designers use during the process of identifying problems designing solutions.

Brainstorming in its traditional sense is perhaps one of the worst ways to come up with ideas.

Usually, ideas come to us when we give our minds space — while going for a long nature walk, while working out, while in the shower — they tend not to come to us while in a high intensity groupthink environment surrounded by peers, superiors and having been given just one hour to come up with ‘breakthrough’ ideas that will save the company from disruption.

However, by bringing together the right people, creating the rightenvironment and using the right tools, we can drastically improve the outcomes of such initiatives.

That’s where design thinking comes in — as it walks participants through proven pathways for inspiration, problem definition, idea generation, prototyping and testing.

According to Tim Brown, author and CEO of world renowned design consultancy, IDEO, “design thinking is a human-centered approach to innovation that draws from the designer’s toolkit to integrate the needs of people, the possibilities of technology, and the requirements for business success.”

The lean startup is used to turn these proposed solutions into business models, underpinned by assumptions that are rapidly tested with actual customers to separate truth from fiction, learn and iterate towards product market fit.

Globally, about 95% of startups fail and the number one reason is market failure — building what nobody knows exists, nobody wants to buy or nobody wants to pay more for than it costs you to get it in their hands.

The lean startup methodology was born out of Silicon Valley in the late noughties, however owes its roots to Toyota’s lean production system and the US Department of Defence’s OODA philosophy (observe, orient, decide, act, which is also fundamental in agile). But while Toyota’s system teaches us how to builds things efficiently, it doesn’t teach us what to build in the first place.

The lean startup is used to rapidly experiment across problem, solution, customer segment, distribution channels, marketing channels, revenue models, cost structures, messaging and so on in order to complete the puzzle that underpins any idea for as Michael Dell put it, ideas are a commodity, execution of them is not.

Agile is at its core, a way of working, characterised by frequent and incremental delivery of product, ongoing reassessment of and adaptation of plans.

Once you have a pretty good idea of what you’re taking to market and what the underlying business model looks like, you can start to deliver proposed feature sets but engage customers all the while so that you don’t over-deliver.

A classic case study from Jeff Sutherland’s book Scrum tells the story of an Agile developer who won a $10M, 20 month contract to deliver software to a large construction company and if the construction company wanted to terminate, they could do so at any time and simply pay 20% of the value remaining in the contract.

The agile developer got to work, focusing on high value features first. After just the third month and just $1.5M billed, the construction company terminated the contract because they had received the main value they desired. They paid out the remaining 20% ($1.7M) for a total of $3.2M of the $10M contract. The developer also won — their profit margin soared from a forecast 15% in the original contract to 60% and they now had 17 months free to bid, win and deliver other work in the same manner.

This flies in the face of the traditional requirements definitions which see teams sticking to a script of features, regardless of the incremental value or lack thereof that delivering subsequent features actually deliver.

Focus on outcomes, not on inputs.

To simplify, design thinking helps us come up with better ideas, the lean startup helps us turn those ideas into business models that work and agile helps us deliver the product to market in a fast, incremental way so that we get ongoing feedback, adapt and deliver precisely what the customer wants.

By combining design thinking, the lean startup and agile, you are far more likely to not only come up with better ideas but turn those ideas into viable money makers and deliver them in a way that creates immediate value for customers, doesn’t result in cost and schedule blowouts — synonymous with innovation at large companies — and give your employees the opportunity to partake in more rewarding and fulfilling work.

This last point is key, all of these methods engage users in a frequent feedback loop so we can measure progress and adapt so that we are maximising value creation. This is at odds with the old way of over-planning and then and only then moving to doing, often for months or years on end (as is the case with digital transformation projects — which by the way fail 90% of the time), without feeling of accomplishment or completion until the very end of the project, where oftentimes — because of the inherent lack of feedback and unwaveringly sticking to a script — things come unstuck. Nobody wants to spend months or years delivering something that doesn’t create impact or deliver value.

At its core, these tools don’t just help your organisation build better products, they unlock your people’s potential to create more impact and lead more fulfilling lives and with employee tenure getting shorter at most organisations and employee engagement gaining higher prominence as a priority, companies can ill afford not to at least start experimenting with these approaches to not only product development, but ways of work.