Kevin Hart’s The Decision is Motivation for the Motivated 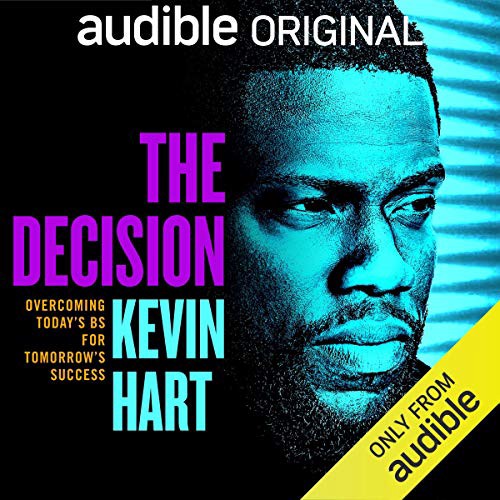 When you think personal development and self-help books, a handful of names typically come to mind.

And I’ve read them all.

At 29, I found myself with a six-figure salary, the business class flights, and access to all of the corporate junkets my liver could bear.

But I was miserable — miserably comfortable.

I bought into the great lie that getting a degree and climbing the corporate ladder would bring me happiness, but all it did was bring me money and so-called status at the expense of enjoying how I spent most of my waking hours.

I spent the weekends inebriated as I sought a reprieve from the drudgery of work, culminating with my blacking out on more than one occasion from one too many drinks.

As someone who had always strived to be better, I caught myself before this downward spiral consumed me. As many of us tend to do once we’ve endured some kind of difficulty, I sought out answers to life’s big questions.

What should I do with my life?

I didn’t really have access to mentors who could provide objective and believable advice on the matter, so I turned to books.

I ventured down the well-trodden path of personal development, business, philosophy, psychology, spirituality, and motivational books that line the shelves of your local bookstore.

And for the most part, these books changed the way I saw the world and showed up.

I made fundamental changes to how I live and work.

Today, at 36, I run a seven-figure business doing work I enjoy, I have published several books, including two — Employee to Entrepreneur, and Time Rich — that might be considered personal development books themselves.

I’m pretty happy with where my head is at these days so it has been a while since I read a pure personal development book.

After a while, you come to realise that all self-help books more or less sing from the same songbook anyway.

I’ve instead invested my time into more practical matters such as decision-making, economics, science and technology, as well as the occasional classic fiction book.

However, all of that changed when I heard superstar comedian Kevin Hart appear on The Joe Rogan Experience for the second time, which like his first appearance, was incredibly motivating. But not only that, it was here that I first caught wind of the fact that Hart had released a self-development audiobook of his own — an Audible Original called The Decision.

We make decisions every day.

The decision to wake up early or hit snooze several times.

The decision to take ownership for adverse outcomes, or make excuses.

The decision to put in the reps in the gym, or put it off until tomorrow.

And these decisions compound. It’s a widely-known fact inside of personal development communities that getting 1% better each day translates to a 37X improvement over the course of a year.

And Hart’s audiobook helps us get there.

In it, Hart combines comedy, pop-culture references, and actionable wisdom, in a way that almost every other self-development author would love to do, but can’t. There’s also enough swearing here to see the late and clean-spoken motivational coach, Zig Ziglar, roll over in his grave. But it works.

It is worth the price of admission for the entertainment value alone. The ‘golden nuggets’ Hart drops along the way make it orders of magnitude more valuable than its shelf price.

The Decision is motivation for the motivate, and unmotivated alike.

As Joe Rogan says, Kevin Hart is the only guy he knows who gets more done than he does — except for maybe Elon Musk.

If you need a proverbial kick up the backside, and want to laugh yourself silly while those kicks are being administered, The Decision is for you.