How I Escaped from the Corporate World 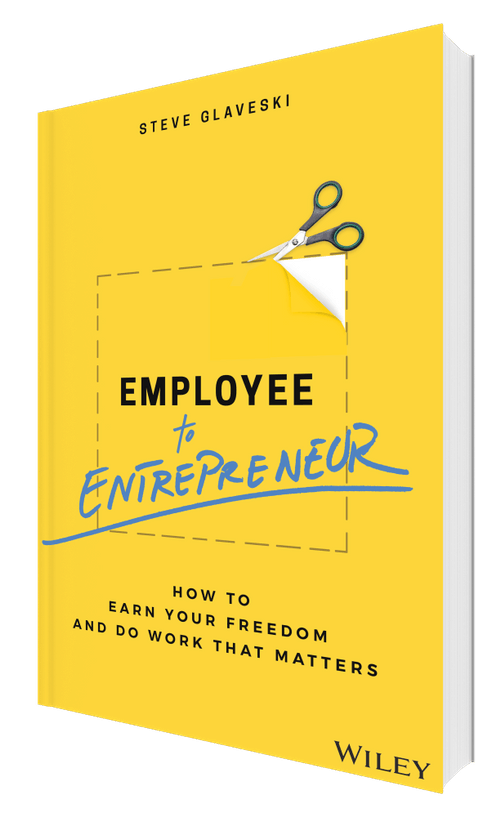 The following is an extract from my forthcoming book, Employee to Entrepreneur: How to Earn Your Freedom and Do Work That Matters.

I was summoned to Human Resources on the 15th floor of a central Sydney office tower in the city’s iconic Martin Place precinct, home to Macquarie Bank, the country’s largest investment bank. Earlier that day I was featured in a one-page article in The Australian newspaper, in which I was referred to as an employee of the bank. Only it wasn’t for anything I’d done for the bank. HR wanted to know how this media attention had come about. What a loaded question! My mind shifted back almost 12 months.

At the time I was working 800 kilometres away at Ernst & Young in Melbourne. As a consultant for the big four accounting and professional services firms, I saw acres of vacant office space at almost every client site I visited, which prompted me to turn over the idea of an ‘Airbnb for office space’, connecting vacant office space with flexible workers, freelancers and business vagabonds. And the idea of Hotdesk was born.

I took the gig with Macquarie in April 2013, which meant moving to Sydney, but I kept working on Hotdesk, reading and learning everything I could about building a startup. I quickly realised how right Socrates was when he observed almost 2500 years ago that the more you know, the more you know you don’t know.

I first tested customer appetite for the concept by posting a free advertisement for a non-executive director on the Australian Institute of Company Directors’ website. At the time, I was interested in obtaining some guidance by bringing on a non-executive director; but what I ended up doing instead was learning what a number of people with business acumen thought about my idea.

Placing this free ad scored me about 25 meetings with both corporate executives from the commercial real estate industry and successful startup founders. They all asked me many questions that hadn’t crossed my mind, all of which I used to go back to the drawing board and update my business model. The overwhelming consensus, however, was that I was ‘onto something’.

Based on this early positive feedback, I decided that I’d build what Eric Ries, author of The Lean Startup, refers to as a ‘minimum viable product’, or MVP. This is, effectively, the simplest version of a product that creates sufficient value for customers that they are willing to pay for it. I hacked together a prototype, using a $500 online script that mimicked Airbnb’s two-sided marketplace platform and an India-based web developer I’d found on the gig economy platform Freelancer.com. This bare-bones version of what I envisaged putting to market cost me a little under $2500 and took a couple of months to develop.

With prototype in hand, and with more than a hint of healthy naivety, I decided to Google ‘how to write a press release’ and try my hand at writing one. After working through a number of drafts, I mustered up the courage to send the result to almost every email address I could find (or guess at) belonging to technology, startup and commercial real estate journalists. Often I would glean these addresses from their Twitter profile. (Of course, today there are a number of online tools you can use to find email addresses, and we’ll get to those later!)

The days went by and I heard…nothing. The proverbial crickets, if you will.

Just when I had given up all hope and resigned myself to a career in banking, one journalist (out of almost a hundred I had emailed) got back to me. It happened to be a cadet journalist at The Australian by the name of Gina Rushton. The email went something like this: ‘Hi Steve, thanks for this. Sounds interesting. Do you have a moment to chat?’

The next morning, after excusing myself from the office for a ‘business meeting’, I was interviewed over coffee, which for a wantrapreneur like me was quite the thrill. I thought I’d already made it! As I would later discover, this kind of foolish confidence makes and breaks many an entrepreneur. Gina contacted me again later that afternoon. ‘We’re going to run the story…but we need a photo. Are you free tomorrow at noon?’

What followed was a pretty elaborate photoshoot (for me anyway!) in the middle of Sydney’s Martin Place, around the corner from Macquarie Bank’s corporate HQ. Inevitably, given that the photoshoot took place at noon, I was spotted by a number of perplexed colleagues on their way to their respective lunch spots.

The article dropped the following day. Not only was it circulated nationwide to the paper’s 300 000 readers, but it was also distributed through the ‘Macquarie News’, a daily compendium of press clippings mentioning the bank that was emailed to every one of the bank’s 14 000 employees. So I wasn’t surprised when my manager at the time asked for a word. I assured him this was just ‘a little side project’ that was not infringing on my work at the bank — which it wasn’t. I found I could easily meet and even exceed daily expectations with two to three hours of solid effort a day (excluding meetings, of course, which were usually meetings to prepare for meetings, to revisit what was discussed during a previous meeting or to get out of actually doing work).

That’s when I got the call from HR summoning me to the 15th floor.

I quickly dismissed the mention by the journalist that I was a Macquarie Bank employee as an irresponsible oversight on my part and swore it wouldn’t happen again. They seemed satisfied. Less than three months later, thanks to the interest generated by this article, I had raised seed funding to the tune of US$120 000 and my ‘little side project’ was fast becoming a full-time pursuit.

During this time, I started my podcast, Future Squared, and found the time, inspiration, knowledge and desire to self-publish two books. Our team also spun off the children’s entrepreneurship program Lemonade Stand to inspire a new generation of kids to leverage the power of the internet, not only as mindless consumers but as empowered producers.

For the article that The Australian published back in 2013, click here.

Find out more about Employee to Entrepreneur and gain access to free resources to help you on your own entrepreneurial journey.