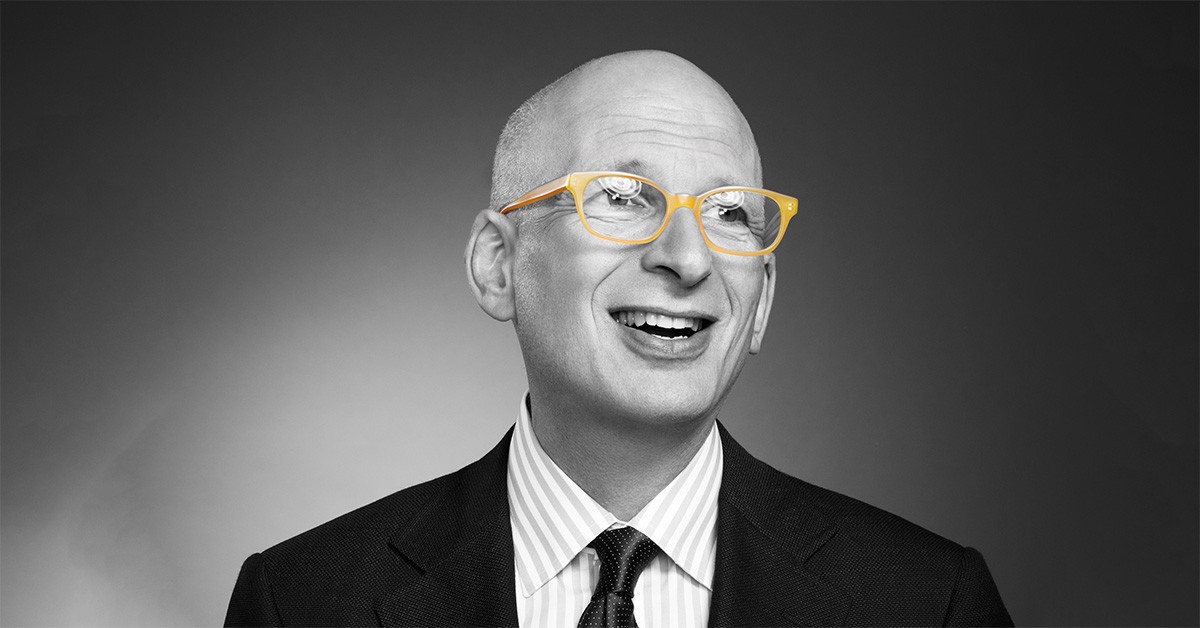 I recently had the pleasure of speaking with marketing luminary, Seth Godin, for an episode of the Future Squared podcast.

Of course, Godin needs no introduction to most of you reading this, but the TLDR of it is this - he’s the author of 19 books including titles such as Linchpin and Purple Cow, he wrote 8,000 odd blog posts and founded of companies such as AltMBA, The Marketing Seminar and YoYoDyne. He sold the latter to Yahoo! For US$30M.

In 2018, he was inducted into the Marketing Hall of Fame.

With such an enormous body of work, it was difficult to know where to begin preparing for our conversation, but after some pontificating, I landed upon reconciling conflicting belief systems and paradoxes that exist within entrepreneurship, business and life more broadly.

For example, if you are an ambitious entrepreneur who also meditates, how do you reconcile self-acceptance with drive?

Or, if you hire for culture fit, does that mean you suppress your company’s creativity and ability to innovate at a time when adaptability is key?

Or, say, if you build an efficient company, does this same efficiency, a strength characterised by process and policy, become a weakness in times of change?

We explored questions like these and I managed to extract some profound insights from the mind of Seth Godin, insights that I have taken the time to summarise for your convenience here.

But if you’d prefer to listen to the entire conversation and get all of Seth’s nuanced takes on business and life, find a link to the conversation below, or search for ‘Future Squared’ wherever you listen to podcasts.

1. Stop doing things that don’t support the achievement of your goals

It sounds simple but so many of us are either:

a) Doing things that are designed to give us a place to hide from the work (email, meetings, social media, reading blogs)

b) Doing things that other people put there (saying yes to meeting requests, and yes to all sorts of non-sensical requests for our time that aren’t aligned to our goals)

On reconciling drive with self-acceptance, Godin says that they are not mutually exclusive.

He says no to (a) and (b) by not having a television, not doing meetings, and not using Twitter or Facebook. As a result, he estimates that he gets back about eight to eleven hours a day for investing into higher value activities in line with the changes he seeks to make, as well as giving him ample time for personal reflection, family, friends and extra-curricular activities.

2. You need to have insurance

No, I’m not talking about car or life insurance — although you probably need those too — but venture insurance, especially during the early days of a business venture when uncertainty is high, and change is unavoidable.

There are merits in going ‘all in’ in business, but the prudent thing to do when you’re facing almost insurmountable odds, is to have multiple streams of income, lest you fall victim to a the desperation and sub-par decision making that comes with a ‘do or die’ mindset.

This is why venture capitalists diversify by investing into a large portfolio of startups instead of just one. The same goes for your own financial investments.

Seth is a proponent of having the proverbial Plan B.

3. Don’t compare yourself to Google

While startup media is littered with stories of home runs, such as the Snapchats and Netflixes of the world, and tries to extract business lessons to apply to your own early stage venture, Godin says that “the laws of physics are suspended for Netflix and Apple”.

Every company is on its own journey, facing its own set of unique challenges and nuances, and while there are no doubt lessons one can learn from the journey of larger organisations, those lessons are susceptible to the narrative fallacy, and susceptible to leading you down the garden path.

Take lessons from others, but always ask ‘might this apply to my unique circumstances?’ and ‘why might it not apply?’ before taking action. If you must take action, experiment, instead of going all in. Google Ads might’ve worked for a like company five years ago, but before you hand your entire marketing budget to Sundar Pichai, perhaps start with $100 and see how that goes?

“Followers aren’t followers”, says Godin. “That’s just a term the social media companies use”. Truth. Godin rallies against the new model of ‘become famous, then try to sell something’, because it is inherently flawed.

How many of those ‘followers’ can you really look in the eye and sell something to?

Instead, Godin urges us to focus on building something that fills very specific needs for people who will not only pay you for it, but not go to sleep without telling someone else about it first. And to do that, we don’t need to be Google (see #3), we just need to find our smallest viable market.

Minimum viable products have been all the rage ever since Eric Ries released his influential book, The Lean Startup, back in 2011; ‘that version of a new product a team uses to collect the maximum amount of validated learning about customers with the least effort’.

But too many entrepreneurs forget the V, and end up release half baked solutions to poorly defined problems onto unsuspecting recipients. Oftentimes, this results in an ‘MVP hangover’, particularly if the market of recipients or potential customers is small, and results in bridges being burned that can take a long time to rebuild.

Perhaps another way to look at this is to take a leaf out of Godin’s book, The Purple Cow, and build a ‘minimum remarkable product’ instead.

6. Stick around long enough so people come to trust you

To quit or not to quit? That is the question.

I asked Godin, “how do we know when we should quit and move on’ if we’ve run numerous experiments to test a business idea, and nothing seems to be moving the needle.

There is no easy answer, but Godin suggests that sometimes you might have a solution that people want, but you need to stick it out long enough so that people come to trust you.

As I’ve said previously many a time, beware the false negative.

He went on to say that the longer you are in the game, and the more time you spend with potential customers, the better your sense for your market becomes, and the better your decision-making becomes. You develop what he calls practical empathy; “you don’t need to have cancer to be a good oncologist”, says Godin.

Ergo, knowing which direction to move in becomes more innate with time, something Australian Football League championship-winning coach, Paul Roos, also echoed in my conversation with him on decision-making.

7. You are complicit in shaping your company’s culture and your path

While it’s convenient, and a form of ‘hiding behind the work’ (see #1) to point the finger at leadership, policy and company politics for your inability to get things done or create, Godin insists that the employee is also complicit.

Leaders are hungry for people to step up and ask “please, can I have some responsibility with authority?”, says Godin.

Playing the victim card doesn’t empower you to change anything. Taking ownership does.

8. Signal reproductive fitness (or just that you’re really good at what you do)

The reason why famous universities — which Godin differentiates from good universities because he doesn’t see a correlations — and why consultancies like McKinsey can charge a lot more than their peers is because of their signals.

Signalling is something inherent in nature; just look at a peacock’s rustling of feathers, as it signals reproductive fitness to a peafowl during mating season.

In order to send positive signals, and reap the rewards, you need to focus on developing your:

b) Body of work

This is why McKinsey and Harvard can charge what they can, says Godin.

9. The assembly line is great, providing the world stands still

The assembly line in this instance, is a metaphor for process, policy and bureaucracy that is designed to make us and our businesses as efficient as possible. But as Peter Drucker once posited, “there’s nothing worse than the wrong things done right”.

If the world changes, then you will be efficient at doing the wrong thing. And when that assembly line effectively has different people playing small, incredibly specialised roles, then changing direction is not something that you can do without affecting a large percentage of the workforce.

When Godin tried to get a book publishing business off the ground, he heard this same very “no” about 800 times in his first year. But he developed a more positive relationships with “no”, it wasn’t no, it was just “no…for now.”

I added that Scott Belsky of Behance, who I interviewed in episode 357of Future Squared, used surrogate metrics with his team, to celebrate small wins along the way to the light at the end of the tunnel, in order to maintain motivation.

No is also your best teacher. Every time you hear no, ask why; was it the price, the product, a lack of social proof, your responsiveness…

The more intelligence you collect, the more practical empathy you develop (see #6), and the more positive your outcomes will be.

11. Hire for Diversity of Thought

Pre-empting the Renaissance, the Medici family brought engineers, architects, painters, sculptors, poets and so on to Florence, and it was at the intersection of these disciplines that creativity flourished.

I asked Godin whether hiring for culture fit kills creativity, and he responded to the affirmative. We need to vie for a diversity of not just what we can see, but what we can’t see; thought.

Failing to do so is akin to an orchestra featuring a violin and trumpet, but no cello, clarinet, horn, piano or trombone.

12. “If you can help it, get as far away from Silicon Valley as you can”

In a somewhat, although less contrarian fashion today than five years ago, Godin urges people to get away from the homogenous culture of the ‘Valley.

Having spent time living in Menlo Park himself, Godin referred to a sign that was erected in the Valley that suggested that the place was populated with nothing but people with low morals who want to make lots of money.

Nowadays, Godin urges, you don’t need the kind of capital that an industrial startup needs to get started, and that being away from ‘the hive’ can actually be a strength.